Remember When: Mausoleum in Magnolia 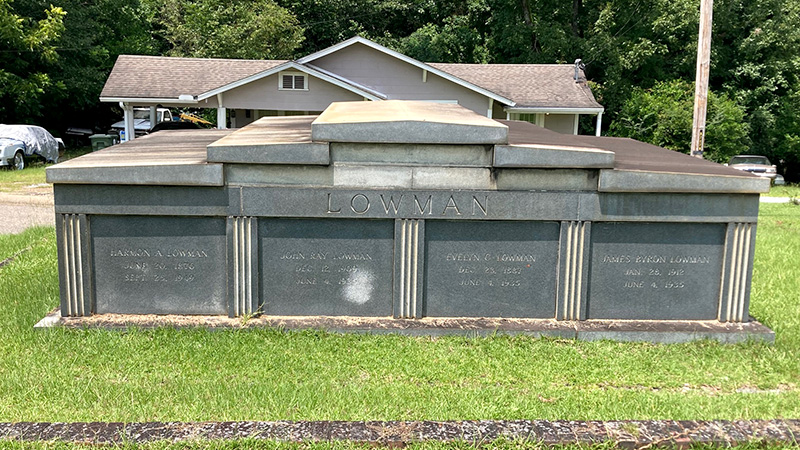 For those of you who have enjoyed the solitude and beauty of Andalusia’s old Magnolia Cemetery located behind the Covington County Courthouse, you may have noticed the large mausoleum that sits about halfway down Opp Avenue on its east side. The steps leading up to the cemetery display a marker that reads Wilder-Lowman. This story begins with Dr. T. Q. (Thomas Quincy Ray).

Dr. Ray was born in Pike County along the Pea River near Eufaula. He was the great grandson of a Revolutionary soldier. He was graduated from Brundidge High School in 1883 and married Nettie Mahoney in the fall of 1885. Following his marriage, he worked on a farm hoping to be able to become a physician and surgeon one day. In 1892, he entered the Atlanta Medical College where he completed his studies in May 1895. He entered into practice in Dozier, Alabama where he remained for seven years and later moved to Searight which at the time was the terminus of the Central of Georgia Railroad. Not only did he practice medicine in Searight, but also operated a drug store in the community. 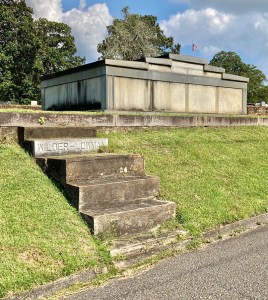 When the railroad line was extended from Searight into downtown Andalusia in 1899, he along with a number of other businessmen moved his practice to Andalusia where he lived and worked until his death. Dr. T. Q. Ray served as Chief of Staff of the old Andalusia City Hospital which in later years became known as the Covington Memorial Hospital. His office was upstairs over Riley’s Drug Store in the Prestwood Building.

Dr. Ray served on the Andalusia City Council for eight years. He also served as a deacon in the Missionary Baptist Church (First Baptist) for more than 40 years and moderator of the old Zion Baptist Association for a number of years. He owned a large farm near Brooklyn in Conecuh County just over the county line.

Oldest daughter Evelyn was married to Harmon A. Lowman who was prominent in business and owned the Nehi franchise in the Miami area where they lived. A tragic event occurred in this family in 1935. The two sons John and Byron Lowman were flying with their mother Evelyn (“Evie”) in their private plane to Andalusia for a visit with relatives. They were overtaken by a heavy downpour of rain near Monticello, Florida. This bad weather caused them to crash killing all three occupants instantly.

For more than two days, an extensive search by coast guard airplanes and searchers on foot was made. The wrecked plane and bodies were finally located. Several family members had gone to Lake City to assist in the search for the plane and finally “returned to Andalusia with the grief stricken husband and father, Harmon A. Lowman.”

The Andalusia Star, June 13, 1935 edition, printed a front page article with pictures of the plane and the two sons. The headline read, “MOTHER AND TWO SONS DIE IN PLANE CRASH.” John Ray was an experienced pilot, and James Byron was a student at the University of Alabama. “They were considered fine young men of excellent character,” the local paper stated.

The Star account read, “The tragedy which befell the Lowman family and the loss sustained by their relatives was perhaps one of the most pathetic which has come under the observation of the residents of Andalusia.”

The bodies were brought to Andalusia where they lay in state at the Ray home on South Three Notch Street. Funeral services were held at the home of Mrs. Lowman’s parents, Dr. and Mrs. T. Q. Ray. (Funerals held at home were quite common in the day. Their home was just past Baker Street near the later site of Russo’s Service Station.)

The Star reported, “Seldom has there been seen here as large and beautiful contribution of floral offerings. The three satin draped caskets were covered with blankets of white flowers and the many other floral designs fittingly surrounding them.”

The obituary stated that the bodies were interred in Magnolia Cemetery with Benson and Company in charge. (Foreman Funeral Home had not been established yet in 1935.)

This writer is not sure how long it took to construct or to order a custom mausoleum, but the three bodies were laid to rest in Magnolia Cemetery. The father Harmon A. Lowman passed away some years later in 1949, and he was placed in the Lowman mausoleum at that time.

So now when you readers ride along on Opp Avenue, if you are headed north, look to your right and you will see the large mausoleum above the steps and Remember When I shared this story with you.

*Emmett Ray, the Ray child #2, married Minnie Jones and practiced medicine in Birmingham at West End Baptist Hospital; Ped, #3, was a registered pharmacist in Birmingham and died in the flu epidemic in 1918; Mary, #4, was graduated from Judson College in the Class of 1923 and married Guy B. Wilder of Andalusia; Richard, #5, married Mary Payne and worked in Birmingham for Vulcan Materials where he became Secretary-Treasurer for the corporation; Quinnie, #6, married Marlin Coale and lived most of her life in Brewton and Mobile.

Thanks to information I obtained from “The Heritage of Covington County, Alabama,” a story written by Dr. Ray’s granddaughter, Polly Wilder Waits.