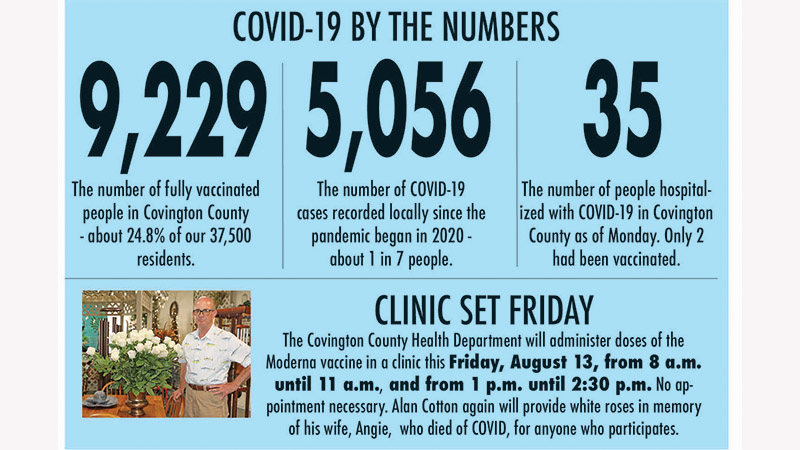 Mayor Earl Johnson on Tuesday joined the We Can Do This Alabama Mayors’ Challenge and challenged other mayors in Covington County and surrounding areas to do the same.

The initiative is designed to increase the number of vaccinations in the state by 20 percent by Labor Day, which falls on Monday, Sept. 6.

“I gladly accepted this challenge when I heard of it today,” the mayor said. “But in Andalusia, we weren’t waiting for anyone to challenge us. We have been hard at work trying to convince people to become vaccinated.”

Alabama is the least vaccinated state in the nation in the race to defeat COVID-19, and Covington County’s vaccination rate is slightly lower than the state average.

Last week, the Andalusia City Council unanimously approved a resolution encouraging local residents who had not been vaccinated to take a vaccine. Mayor Johnson had already reinstated a mask requirement for all city buildings.

“I have spoken with physicians who believe the current surge in COVID cases will be worse here than at the height of the pandemic because we have so few people who are vaccinated,” the mayor said. “I have personally lost friends to this virus, and I don’t want anyone else to suffer those losses. We have employees who have lost family members, and some of them have been young family members. This virus is serious, and we need to do everything we can to fight it.

“If the United States and Alabama were being invaded by a foreign country, we would all take up arms and do everything we could to defend our family, friends and way of life,” he said. “The virus is a foreign agent that is threatening the health and welfare of our nation, and we need to work together in the war against it.”

The mayor said that the total number of COVID cases reported in Covington County has increased by 192 in the past week. As of Monday evening, there were 35 people hospitalized with COVID in Covington County, and only two of those had been vaccinated.

But the mayor said he sees some progress. During the same period of time, there have been 465 doses of the vaccination distributed in Covington County, and the number of completely vaccinated people has increased by 107 to 9,229, or about 24.8 percent of Covington County’s 37,200 residents.

The mayor expressed his thanks to Alan Cotton, who became a vocal proponent of vaccination after he lost his wife, Angela South Cotton, to the virus in July. She died 10 days after her diagnosis. Mrs. Cotton was not vaccinated because she had allergies to some medications. Alan Cotton has provided long-stemmed white roses in her memory to those who have participated in local vaccine clinics since her death.

“The seriousness of the virus does not get any more real than what the Cotton family experienced,” Johnson said. “I have personally been asking people I know who have not taken the vaccine to do so. I hope that others will sign up for this challenge and help us improve our vaccination numbers quickly.”

Those who agree to participate in the challenge can sign up at www.WeCanDoThisAlabama.com.