Owens turns to faith in fulfilling dream of writing

Risa Owens has overcome many obstacles throughout her lifetime and made the most of them. Despite all she encountered, she gained the courage to detail those roadblocks and publish her first novel Little Girl Lost in the Mazes of Life.

Originally from Robertsdale, Alabama, Owens moved to the McKenzie area in January this year. “I wanted to be near the family I had here. It was like coming home for me,” she said. She said her biggest inspiration is God, and He is what ultimately led her to become a writer. “I’ve never had any talents to speak of, so I asked Him to give me one. It was at that time I began to write poems.” She said her daughter, Dana Owens Travis, has always been her biggest cheerleader. “I want to thank her for always believing in me.” 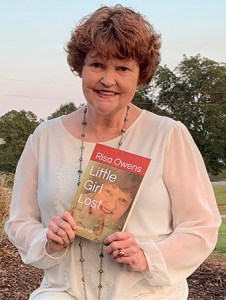 Risa Owens writes about overcoming some of the obstacles she has encountered through life in her book, “Little Girl Lost in the Mazes of Life.”

Little Girl Lost in the Mazes of Life chronicles Owens’ life from when she was in the womb. She said, “The doctor had pronounced me dead, and when I was born alive, to his surprise, he was stunned. That started a series of lifelong events in my life from birth defects to obstacles I would have to overcome. Those ranged from sickness, a learning disability, and a severe speech impediment. Doctors even told my parents I was mentally retarded, but in reality, I was not.” She said because of that, she was not allowed to go to school until she was 9 years old when a suitable school was found for me.

Owens explained how her family pushed her to the side because they didn’t know what to do with her. “I struggled with my relationship with my mother. I needed her and she wasn’t there for me. I struggled with God who I didn’t understand at the time. I was a little girl who was abandoned, rejected, and I felt unloved. When I turned 17, I found the love I needed in the arms of a man with who I fell in love. He left me a short year later,” she said. After finding out she was pregnant, she had to adjust to life as a single mother. “He never came back to us and died 6 years later of a drug overdose.”

She said Little Girl Lost talks about the pain, rejection, hurt, grief, and the miracles that God did in her life. “He healed me from a learning disability and from a wounded, bitter heart, and spirit.” Owens now enjoys writing about life and the experiences we go through. “I draw wisdom and learn life lessons from that,” she said. Her major inspiration for the story came from the fact God gave her those life lessons. “He made me feel like I had a purpose to tell others who might have gone through the same things I went through. I want to let them know they are not alone, and there is a God who loves them. He wants to help if they will let Him.

Owens was involved in an automobile accident in August 2019 that dramatically changed her life yet again. “I was going to pick up my granddaughter on her first day of seventh grade when a kid ran the stop sign and hit me in the side of my SUV. I lost control of my vehicle, and the last thing I remember is going up a grassy hill about to hit more cars before turning the steering wheel back to the right. Somehow, my SUV got back onto the pavement and into park. I was unconscious, so ‘Jesus Take the Wheel’ has a whole new meaning to me. That day taught me that we don’t have time to think about writing a book or anything else we want to do. We just have to do it.” 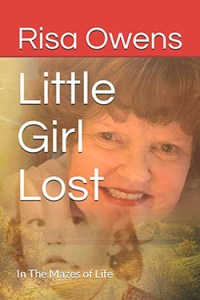 Little Girl Lost in the Mazes of Life Front Cover

Her favorite authors are Judith McNaught and Joyce Meyer. “Judith writes about historical romance, and I like her stories. Joyce is real and practical, and she writes about life.” Owens plans to do a revision on her first story and change the name to The Heart That Grieves before adding more content. She is working on a sequel and is hopeful to do a book detailing a biblical character.

For more information contact her at risa.owens@yahoo.com or 256-276-7255. “I am hopeful my writing will lead me to a part-time job. I want to let others see what I’ve been through and let them know God is always there for you,” she said.