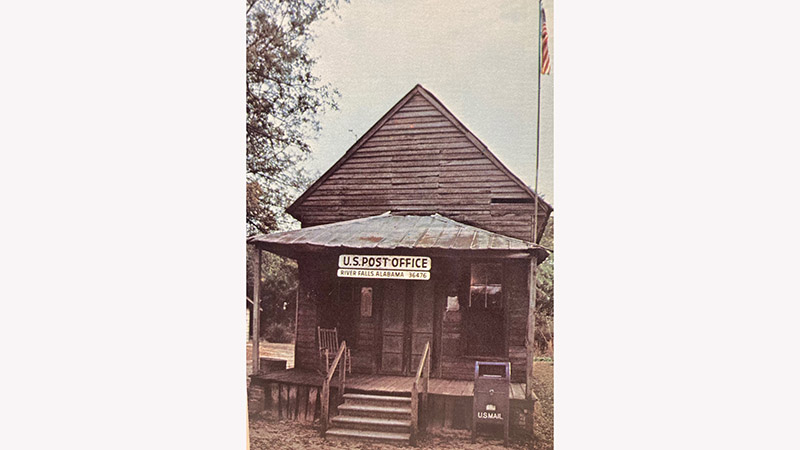 The town of River Falls is located at the intersection of U. S. Hwy. 84 West and Alabama Hwy. 55. Created in the latter part of the 19th century, postal records indicate that the River Falls Post Office was established July 22, 1891 with Mary B. George Edge as postmaster. The site designated by the Central of Georgia Railroad was called “Saginaw” but the proposed train stop never materialized.

The old River Falls Post Office building was a unique landmark for many years. Some writers of local history like G. Sidney Waits stated, “It is the most photographed building in our county (Covington).”

The historic post office building was first constructed to serve as a physician’s office and school classroom. Dr. William Whatley Pierson, a native of Troy, was born in 1859. He moved to the River Falls community to become the company physician for the Horse Shoe Lumber Company.  The management needed a medical doctor on hand to treat and care for the mill employees with the frequent accidents in the millwork line of work.

Dr. Pierson had maintained a medical practice in Red Level for a couple of years but during the early 1900s, he accepted the call to fill the position of company doctor. The two-story  home he built for his family is the first house on the left side of the highway after crossing the Conecuh River on the E. L. More Memorial Bridge. It is one of the few structures that survived the devastating “Flood of 1929” that wiped away the lumber company, commissary, and other surrounding homes in the area.

After Dr. Pierson completed the construction of his home, he set about building a small frame building for his office. At the same time, he recognized the need for his wife’s interest in teaching local children in her private school. The building was erected on the west side of the home place and in the front yard until it was later moved by the Town of River Falls.

There were three rooms in the building – one served as the reception area with the doctor’s pharmacy display in one end. After being converted to a post office, the area was where patrons checked their mail boxes while doing business with the postmaster or postmistress.

The second room was the examining and treatment room for the doctor and his patients. It later became the work area for the postmaster. A wall separating the second and third rooms featured a fireplace used to supply heat for the treatment room and the school classroom.

The third room served as Mrs. Pierson’s classroom and later a storage or freight room for the post office.

After Dr. Pierson moved from River Falls after the “Flood of 1929,” the Bill Houston family purchased the beautiful home  for his family to reside. The post office building was donated to the town by the Houston family and was later moved to a different location.

Eventually Randy and Kim Pebworth, owners of the post office building, donated the structure to the Three Notch Museum on Historic Central Street and Tisdale Street. The Covington Historical Society restored the building to its original condition. The first two rooms are maintained with post office furnishings. The third room, the largest, has been converted to a one-room schoolhouse, exemplary of Mrs. Pierson’s classroom.

This collection includes old desks, photographs of many of the old Covington County and Andalusia City schools and class groups, graduation gowns, school yearbooks, early school materials and textbooks (McGuffey Readers, grade level primers), and even a dunce stool and cap in the corner!

The society continues to welcome artifacts for display since this structure is a popular spot for visitors to tour and passers-by the take photographs on the porch.

Society enthusiasts continue to Remember When the E. L. More family furnished the funds to move this building to the museum district site and restore it to its original condition. Mr. E. L. More was the owner of the Horse Shoe Lumber Company in River Falls from 1898 to about a 1930. Son Livingfield More of Nashville continued to be a long time supporter of the Three Notch Museum until his death.

Sources for writing this column include Curtis Thomasson and the late G. Sidney Waits who both extended much credit to the Pebworths who had the vision to save this significant landmark structure of yesteryear threatened with demolition. They moved it to their yard temporarily and eventually placed it in the hands of the museum in an effort to preserve it for posterity.

Visit the Three Notch Museum soon and enjoy stepping back in time as you enter the little post office building. You might just have a letter, or you may just hear the teacher’s paddle crack! 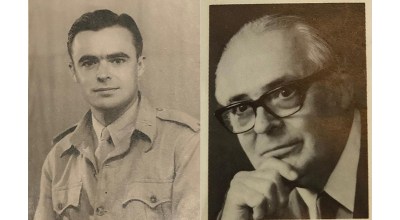