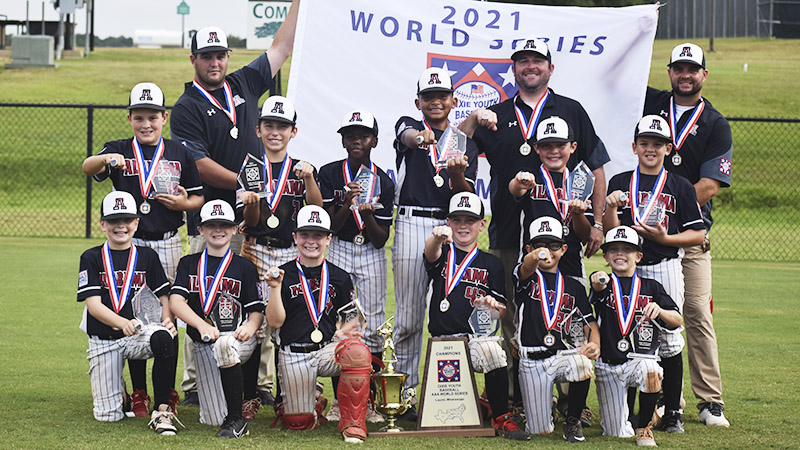 “This means a lot to not only us, but I think for this city as well. I hope this makes young kids in a small town like this realize if you are willing to work hard, you can achieve great things. It’s an awesome feeling to see all the hard work these 12 boys have put in all summer pay off,” said Manager Jordan Maynor. 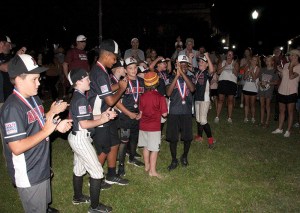 The champions were welcomed home Thursday night with a celebration on the Andalusia downtown square.

Maynor stated he was very proud of the boys for battling through the entire tournament. He said, “There were several times these boys were in tough spots and could have quit. One of my sayings I constantly tell the boys is finish the process. We coach them hard at practice and prepared them for moments like they went through this week. Quitting wasn’t an option for them, and all 12 boys would be the first to tell anyone that.”

The championship run opened with authority as Andalusia routed Arkansas 17-0. The Bulldogs not only blistered the ball but also came up huge on the mound with a no-hitter.

They faced Louisiana in the second game and trailed by three runs halfway through the contest. Despite the deficit, the team flexed their muscles and roared back for a 7-4 win.

The Bulldogs started hot out of the gate in game three and built a five-run lead over South Carolina. As the score got closer, they had an answer and remained unbeaten with a 9-5 win.

Andalusia faced adversity against Texas in the fourth game and trailed by four runs early. Once again the team responded and shut down Texas the rest of the way for a 9-5 win to reach the semi-finals.

Andalusia went into the final four as the lone unbeaten team. Georgia raced out to a four-run lead in the semi-final game. The Bulldogs fought back and tied the game in their last at-bat to force extra innings. Georgia ultimately squeaked out the 8-7 win late and handed the team their first loss. Due to tournament rules, there was a coin toss to determine the order of play for the final three teams.

The team fell on the wrong side of the coin toss and had to quickly regroup for an early morning matchup. It was a rematch against Texas who proved they were going to be tough to beat a second time. The Bulldogs found themselves down a run after two innings but got some momentum and captured the lead. Although Texas mounted a late rally, it fell short as Andalusia held on 6-5 to reach the championship game.

In the championship game, the team had a rematch with Georgia and wanted to flip the script from the previous night’s loss. The championship was much like the first contest between the two teams. After a scoreless first, the Bulldogs took a one-run lead after two innings before a lightning delay.

The stoppage in play was no problem as Andalusia came out of the break and pushed their lead to seven runs. However, Georgia did not back down and nearly erased the huge margin. In the top of the last inning, Georgia had the tying run on third with only one out. This time, Andalusia had the final say and got a stellar double play to seal a 9-8 win.

Maynor said the boys achieved success by focusing on the reasons they made it to the World Series in the first place.

“It came down to how hard they worked to prepare for the tournament. Being at a World Series like that with a lot of free time, you want to be sure the boys are enjoying themselves off the field and making memories. In the end, we were down there to win a World Series and bring the trophy back to Andalusia,” Maynor said.

The team’s manager also said he appreciates the support he and his team received from their hometown.

“I can’t say enough about this city,” he said. “I was born and raised here and there’s no place like it. The amount of support this city showed us is truly unbelievable. This city was invested in us and the coaches and players felt it and truly appreciate it.”

He added that many businesses and individuals donated money to help with travel expenses to the point they were able to pay for each player’s hotel room. “All the boys’ meals and several fun activities they did throughout the week was huge for something like this and we can’t thank them enough. To top it off, we got back to town at 9:15 Thursday night to the Andalusia Police Department and Andalusia Fire Department waiting to escort the boys around the square. It seemed like there were over 100 people waiting to welcome and celebrate this moment with my boys.”