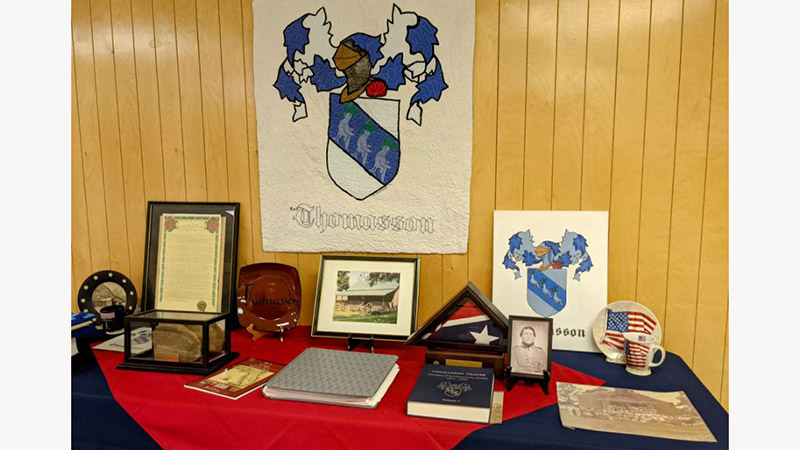 Memorabilia displayed at the Thomasson Reunion 2021.

The annual reunion of the area Thomasson family was missed during 2020 due to the pandemic caused by Covid-19. However, even with the current surging of the various infectious viruses, the event was held on Saturday, August 7. As has been the practice for several years, the gathering was held in the fellowship hall of the Cedar Grove Church of Christ located on Brooklyn Road near Andalusia, Ala. Many of the descendants of James Franklin Thomasson II have and currently reside in that community and attend that church.

Curtis Thomasson, a descendant who greatly appreciates his heritage and lives near, organized and directed the reunion. This series of reunions begun in 1978 in this very location has been continued since with the exception of a very few years during these 43 years. The attendance has ranged from 50 to as many of 400, which was a special occasion in 1983. Among the activities that year was a ceremony to stage the chartering of the local United Daughters of the Confederacy Chapter.

Family Historian Marjorie B. Malloy, was extremely proud of her Confederate heritage and wanted to honor her ancestors who contributed heavily to that cause. She chose to organize a chapter of the United Daughters of The Confederacy and name it in honor of her great, great grandfather, Thomas Randolph Thomasson, pioneer in Covington County. He and his wife furnished eight sons to the Confederate Army, and three of those lost their lives during the war. The five who survived became the ancestors of those who gather each year for this Thomasson reunion.

Margie Malloy personally completed the application forms with appropriate documentation for 56 ladies who were all direct descendants of Thomas Randolph Thomasson and his wife, Sarah Roach. The special chartering ceremony was a highlight of the 1983 Thomasson reunion. At the time, it was the largest UDC chapter to be chartered in the State of Alabama. The State UDC President and other dignitaries were present to officially present the charter and install the officers. In addition, a number of the Thomasson children were inducted into the Children of the Confederacy. Since that date other interested ladies have been accepted into membership, and it has remained active through the years seeking to preserve and honor their Confederate heritage. At the 2021 family reunion, Thomasson descendant and member of the UDC, Janice Bowers Wallace, reported on the chapter’s current activities. Any lady who is interested in joining may contact her, Linda Castleberry or Mrs. Dennis (Tammie) Evans for assistance.

The family collection of memorabilia was displayed as usual with the addition of a new family album of previous reunion photos designed by descendant, Jan Richey Snow. The items for viewing included a painting by Martha Thomason Richey of the early Thomasson home in Louisa County, Va.; a stone from that house contributed by Stephen Hise who also donated an encased Confederate Battle Flag which he carried with him as he traced his ancestor, Cornelius Starr Thomasson’s company’s path as they fought during the Battle at Gettysburg; an original painting of the family crest by artist, Dot Burkett, an adopted cousin; a quilted wall hanging of the family crest made by Charlotte Thompson; a plate with the Thomasson name on it; a framed print of the background of the name Thomasson; a picture of the one-room Thomasson Schoolhouse located in the Burnout community; a large wall hanging of the family tree designed by Curtis Thomasson; and of course, copies of Thomasson Traces, volumes 1 and 2. Hazel McClain, good friend and church secretary, decorated the display tables with a patriotic  American theme of red, white and blue.

After registering, attendees mingled and visited with cousins and visited the displays until around noon at which time announcements and instructions for the meal were given followed by an invocation by James Moore, a descendant who is a retired minister and President of Mt. Dora School and Children’s Home.  Afterwards, the “covered dish” meal was served, which consisted of a wonderful spread of delicious dishes brought by those in attendance.

Following the meal, a family history program was presented beginning with the group singing the old hymn, “Thomasson,” which was led by James Moore, a professional song director for a’cappella style singing. Next, a slide program was shown including pictures of the early Thomasson ancestors. While no photo of Thomas Randolph and Sarah Roach has been found, the large monument placed at their gravesite in the Fairmount Cemetery in Red Level during an earlier reunion was shown. There was a picture of his trunk, which has survived several generations, and one of Sarah’s brother, Samuel Roach, and one of his brother, Beverly Daniel Thomasson’s wife, Sarah (Thompkins.)

The slides following were of the couple’s 11 children, or of those who were photographed. There are no pictures of the son, Madison, who died as a youngster, nor of the three sons who lost their lives during the War Between the States: Thomas Roach, William Monroe and John Randolph. Thomas Roach did leave three children, and William Monroe left one son. None of those children have been located to involve them in the family reunions.

Everyone was very pleased to see so many present who had not attended any previous reunions or had only attended one in the past 43 years.  These included the following: Greg and Martha D’Antonia of Norfolk, Va., Fred D’Antonia of Chesapeake, Va., Jimmy and Teresa Thomason of Oneonta, Ala., Bob and Denise Messick of Montgomery, Gordon Moore of Montgomery, James Moore and his finance of Eustis, Fla., Scott Thomason of Valparaiso, Fla., Nattaleigh Ziglar of Andalusia, Sherby Bryan of Goshen, Ronald and Elaine Bryan or Elba, Tommy and Sherry Bowers of Elba, Faye Henley of Jacksonville, Fla., Carolyn McMullen of Niceville, Fla., Latrelle Wade of Fernandina Beach, Fla., and Sandra Oliver of Fernandina Beach, Fla.