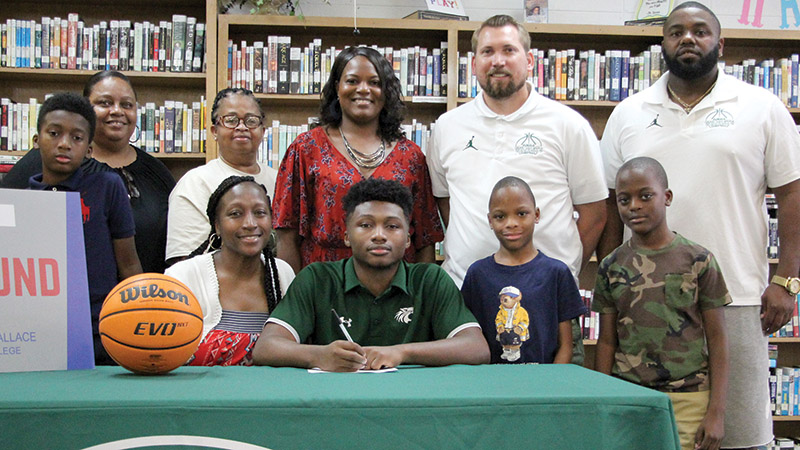 Rashaad Coleman understands the dynamics of basketball and looks forward to continuing something he loves after signing a scholarship with LBW Community College Thursday, August 12.

Coleman has been involved in the sport for several years and has made many memories along the way. “I’ve been playing basketball since I was 5 years old that I remember, but ever since I was little, I always had a ball in my hand,” he said.

His all-time favorite player is Dwayne Wade. When asked why, he replied, “He did a little bit of everything on the court: score, rebound, assist, and defense. As of right now, I like to watch a little bit of everybody to add some things to my game.” He first discovered the game when he was 6 years old. “I started playing little league basketball at W.S. Harlan in Lockhart, Alabama.”

Coleman looks forward to being a member of the LBWCC Saints men’s basketball team. He stated, “I thought it was a great opportunity to expand my game under a coach I know that will push me to my limits and prepare me for the next couple of years of my basketball career.”

He has goals in place to succeed in life and credits his family for helping lead him to where he is today. “That’s the goal for everyone, but I’ve grown up around a hardworking family. I watch them work hard every day. They’ve taught me if you want something, you’ll have to work harder than everyone else to be the best and to succeed. I hope to carry that into my basketball career and life as well,” Coleman said.

“Rashaad is an outstanding young man, and we are so proud of him for earning this opportunity for himself. His stats and both his individual and team accomplishments speak for themselves. More than that, he is a good person that tries to improve each day. He will fit in well at LBW and do his best. I’ll look forward to watching some LBW basketball,” Florala head basketball coach Troy Turman said.

Coleman enjoys everything about basketball, but one thing stands out above the rest. “I love the process of the game the most. If you ask anyone who has seen me play since I was a freshman, they would tell you how much I’ve improved in each and every aspect of the game,” he said.