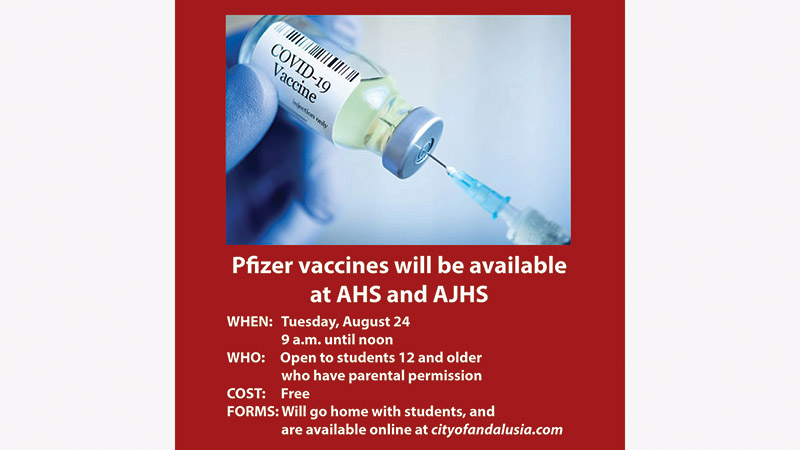 It is in the best interest of students to have in-person learning, but the only way to ensure that is possible in the current pandemic is to increase local vaccination rates of students and adults, local pediatricians agreed on Wednesday.

Dr. Charles Eldridge on Wednesday moderated a discussion with Dr. Bhagwan Bang and Dr. Gabrielle Baldwin that was broadcast on the Andalusia cable access channel and livestreamed on Facebook.

The three veteran pediatricians said there has been an increase in the number of pediatric cases of COVID-19, especially since late July. The Alabama Department of Public Health does not break out cases by age for general reporting, but data presented on its web site shows that more than 512 cases of COVID have been reported in Covington County since August 3.

“If we remain on our current trajectory (of positive cases), there is no way we can continue in-person learning all year,” Dr. Baldwin said. “We have a really effective way of combatting the virus with the vaccine.”

“If we don’t take these steps, we will end up going virtual again,” Baldwin said. “This will have a significant effect on our kids and not in a positive way. Virtual learning is difficult, especially if parents have to work and aren’t able to help their children focus.

“We’ve seen some patients who were in virtual classes and once they got back to traditional classes they were significantly behind their peers,” she said. “Virtual learning also affects mental health. It is at school they learn to interact with each other and develop a support system.”

“We cannot eradicate the pandemic without vaccination,” he said. “Now that the vaccine is freely available, vaccination should be the primary goal. Vaccinating every teenager should be our first priority.”

Vaccines are approved for ages 12 and older.

“I was also skeptical at first,” Dr. Bang said. “But after seeing all of the data, I believe it is safe. This vaccine has gone through the same testing as other vaccines. This vaccine is under microscopic scrutiny.”

Without a vaccine, the only way to achieve herd immunity is for more people to be sick with the virus, he said.

The doctors also agreed that increased vaccinations will provide protections for those younger than 12 for whom the vaccine has not yet been approved. Dr. Bang used the example of a chicken pox vaccine.

“In 1990, we introduced the chicken pox vaccine,” he said, adding it is not approved for children who are younger than 1.

“But it not only reduced modality and mortality (from chickenpox) in children less than 1, it also protected adults,” he said.

The pediatricians also talked about the misconceptions people have about the vaccine, and the fears parents have expressed to them.

Dr. Baldwin said she hears two things: first, that the vaccine will make recipients test positive, and secondly, that it will cause infertility among young adults, as well as birth defects in their offspring.

“That is inaccurate,” she said.

First, the vaccine does not contain live virus, but only a protein, so it is impossible for the vaccine to make the virus replicate, Dr. Baldwin said.

As for potential infertility, she said she believes that concern is caused because people have heard that RNA, which is a genetic material, is used to get the protein into the body.

“The vehicle of messenger RNA is very rapidly degraded once in it is in the system,” she said, adding that the vaccine cannot alter the DNA of a recipient.

Both of her children are vaccinated, she said.

Dr. Bang said that for most, the common side effects of the vaccine would be the same as the side effects for any other vaccine.

“There would be some fever and possible fatigue for a day or two,” he said. “The most significant side effects have been nothing compared to the side effects of the virus.”

All three doctors also said there has been no increase in the infant mortality rate, or in miscarriage, since the vaccine was introduced. However, they said, the virus has been shown to have a high mortality rate for pregnant women, particularly those who contract the virus in the third trimester. They recommended that anyone planning to become pregnant take the vaccine first.

Vaccines will be offered to students at Andalusia High School and Andalusia Junior High School on Tuesday, August 24. Parental consent will be required, and participants will receive the Pfizer vaccine at no cost. Letters explaining the opportunity, as well as consent forms, will be sent home with students this week.

“I urge all of you to seriously consider getting your children vaccinated,” Dr. Eldridge said. “You don’t have to go to the vaccine. The vaccine is coming to you, and it is at no expense to any family. It’s absolutely free. It may save lives, and it may save a school year.”

The doctors’ entire discussion can be viewed on the Facebook pages of the City of Andalusia or First Baptist Church of Andalusia, who assisted with production.