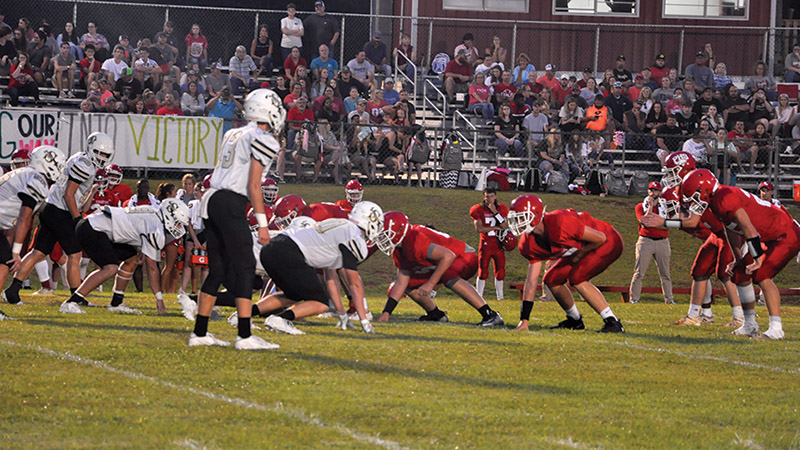 The Pleasant Home offense lines up to run the next play against the Straughn defense.

The Straughn Tigers (1-0) scored six touchdowns on the way to a 42-6 win over the Pleasant Home Eagles (0-1) Friday night.

Straughn Head Coach Ashley Kilcrease said he was pleased with the win. “We have a lot to clean up and have to tackle and block better. There is a lot we can work on to get better. I thought we ran the ball well and threw a little bit. I think we need to be more balanced than we were and have to get off the field on defense,” he said.

Pleasant Home Head Coach Jeremy Silcox said his team had some good moments. “We had three drives in the first half inside the 20 but shot ourselves in the foot,” he said. “We knew coming in we were playing a really good team. The best thing is we came away seeing things we need to work on. Almost everything I saw tonight without watching film is fixable.”

PHS went three and out to begin the contest. After SHS took over at the 20, Abram Guilford ran for 15 yards on the opening play. Jaylon Guilford scored from 1 yard out with 7:53 left in the first. The score remained 6-0 after the PAT failed.

After Pleasant Home crossed midfield, the Tigers’ Eli Guilford recovered a fumble and raced 49 yards to the end zone. Brenden Bartholomew’s PAT was good as Straughn increased its lead to 13-0.

The Eagles began their second drive with a 7-yard run by Ethan Curry, and Nick Short added an 11-yard gain. The drive stalled after a fake punt.

Abram Guilford blitzed 78 yards to pay dirt and the PAT was good for a 20-0 Straughn lead. Mason Anderson started the second with a 17-yard pass to Curry. Pleasant Home was methodical and took almost eight minutes off the clock. Despite reaching the 4, another miscue shifted momentum back to the visitors.

SHS continued to move the ball on the speedy legs of Jaylon Guilford. Abram Guilford found Parker Black on a 19-yard touchdown pass as Riley Brooks converted the two-point conversion for a 28-0 halftime lead. PHS took a knee to run out the final seven seconds.

Straughn dented the scoreboard again with 8:17 in the third. Abram Guilford capped a 7-play, 60-yard drive with a 15-yard touchdown run. Pleasant Home punted on its next drive but kept the ball after Anderson fell on a fumble during the return. The Eagles reached the 5-yard line but were turned away after the Tigers forced a turnover on downs.

PHS scored on its next drive when Hawkins scored from three yards out, which was set up by a 57-yard run by Curry. The PAT was blocked.

Straughn plays Thursday, August 26 at Red Level. Pleasant Home is off next week.