Remember When: 1950 AHS football in the new Municipal Stadium 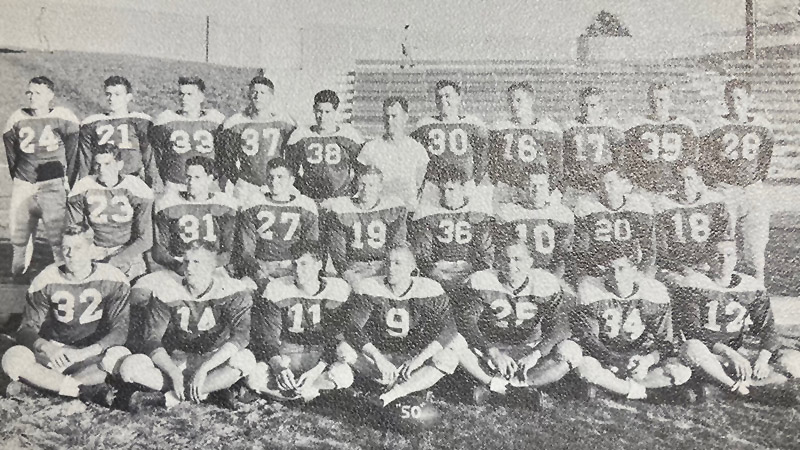 “It’s the first chapter of a new verse for Andy Hi football.

Kicking off the 1950 gridiron season against Red Level in the new Municipal Stadium at 8 p. m. Friday night, the Bulldogs will be shifting from a one-man offensive of by-gone years to play highlighting teamwork. Plans are being made to ready the new stadium for football. The practice field is being used for warm-up session.”

This was front-page news in The Andalusia Star News, Thursday, September 14, 1950 edition.

The August 24, 1950 edition reports,, “Footballers Drill Twice a Day for Ten Days” – Some 45 candidates for the 1950 AHS football team are busy in  two-a-day workouts that Coaches Bill Stanford and H. M. McInnish plan from now until September 1. By edict of the Alabama High School Athletic Association, there will be no scrimmages and no pads used prior to the first day of next month.”

“In the first two days of warm-ups on Tuesday and Wednesday of this week, workouts have been confined to running, passing and punting with some special studies made of formations.”

“Gone from the ranks of the Crimsons is Big Boy ‘Call me Charles’ Little who for the past several years carried the brunt of touchdown manufacture for the Andy elevens. Missing too are a host of other lettermen but coaches have geared for duty a group of fast stepping ball carriers with some plucky line defenders who are determined to make up in scrap their lack of heft.”

“Five lettermen have been participating in the initial practices including Captain Martin Rogers, a guard; Alternate Captain Carnell Booth, back; Jimmy Leggett, back; and line-plunger, A. G. Chavers, and end Felix Kimbrough.”

“Newcomers catching the eyes of observers are L. T. West, husky fullback; and his brother, Barry West, 180-pound tackle. Scatback Royce Byrd, formerly of Frisco City, has given some indications he has the speed needed for a full tryout at QB. B-team member Jackie Reeves also looks promising at the signal calling post.” 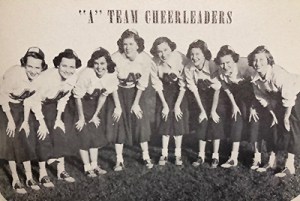 Jill Carpenter Little (AHS Class of 1951) has some wonderful memories about her high school days as an AHS cheerleader. She remembered the saddle oxfords they wore that were red and white. Her mother finally found those shoes for her outfit on a trip to New Orleans. She wore a small size so they were very hard to find. She stated that the cheerleaders had about two megaphones that they passed around and shared. The cheerleader girls usually rode the bus going to out of town trips. “We sat way in the back.” The girls wore beanie caps on their heads. She kept her “A” emblem from her white cable-knit sweater for many years tucked away in a drawer. She remained dear friends with her cheerleader friends for many years.

“Over at Red Level, Coach Richard Streiff is doing little talking about his prospects against Andy Hi in the opener. Ten of the eleven Red Level starters are lettermen. Streiff is in his third year as coach at the county school since his graduation from Mississippi Southern.”

“Left half Lamar Curry is the top ball advancer for RL, but Quarterback Hamner Curry, a southpaw tosser, will be remembered from last year as an ace passer. Lamar does the punting. Dewayne Mason, at center, is the only non-letterman. He was a B squad member at RL a year ago. End Earle Yancey is the team captain.”

“School Principal Reece White has promised a host of team followers will come to Andalusia for the opening game. A squad of cheerleaders who head up the RL rooters will be Irene Cumbie, Anne Grantham, Lyn Sweatt, Lillian Connally, Geraldine Taylor, Patricia Posey, and Fred Burks.” 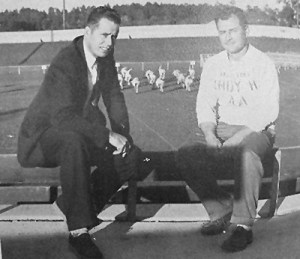 “The 1951 Memolusia yearbook featured “From the Sidelines” in the Sports section. – “In the opening game of the season with Red Level, Andy won 31-0. Both teams fought hard, but it seemed to be Andy all the way. Leggett scored twice. A pass to Stokes from Booth took the ball over for the third tally, and then Booth ran the pigskin for six more points. Maddox scored the fifth touchdown by picking up a Red Level fumble and running 25 yards.”

“The Elba eleven took the second game from Andalusia when an Elba end picked up a fumble and raced for a tally in the closing moments of the game. Elba came out on top 6-0.”

“The unbeaten Evergreen Aggies defeated the Andy eleven 13-12 in a game which will long be remembered.”

“Hoping for a win against Luverne, the Dogs were upset to the tune of 13-6.”

“Troy’s passes clicked all night as the Trojans trounced Andy 33-18.”

“Fleet backs and a neat passing attack were too much for Andy as Eufaula took a 47-14 decision.”

“Greenville boys had a hard fight on their hands but defeated Andy 26-14.”

“The Andy Bulldogs journeyed to Florala and lost by a score of 20-6. With such boys as Reeves, King, Booth, Rogers, Kimbrough, and Adams playing superbly on defense, Andalusia played Florala on even terms the last half.”

“The Enterprise eleven journeyed to Andy hoping for a win, but they were disappointed for the game ended with the score 14-0 in favor of Andy. May, Kimbrough, and Hamiter were largely responsible for stopping Enterprise’s ground attacks.”

“Our spirits were dampened at our first homecoming game when Opp defeated us by a 42-6 decision. Opp stayed ahead all the way, but the team fought hard. Andy’s lone tally came when Leggett raced 66 yards for a touchdown.”

“Hard-working coaches and hard-playing boys – these typify the ’50-’51 Bulldog team. Although wins were few and losses great, the season was a successful one in the light of good sportsmanship and the feeling of fellowship that were fostered. The Memolusia Staff pays tribute to these boys who fought until the last whistle blew and then took their victory or defeat with equal grace.”

Well, in conclusion, it is football season and that assembly song we used to sing on Fridays at the East Three Notch School Auditorium comes to mind.

And they will! Go Bulldogs!