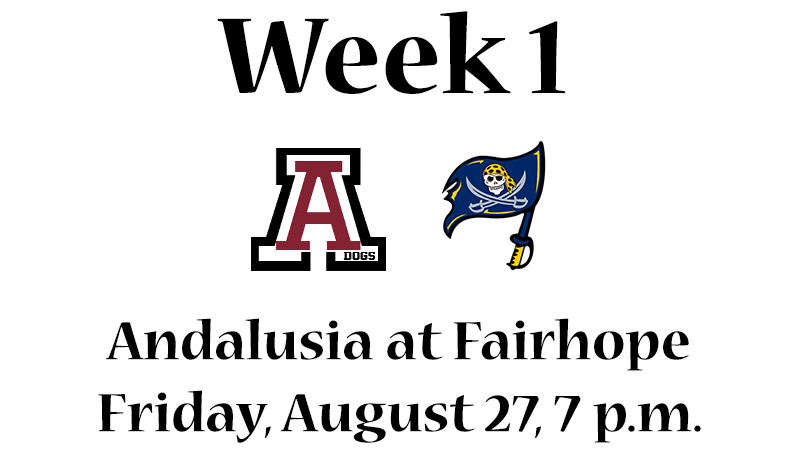 The Pirates enter play after falling on the road to Spanish Fort last week, 21-10. The Bulldogs overcame a 14-6 halftime deficit at Faith Academy and won a last-minute thriller, 21-20.

Head Coach Trent Taylor was proud of the Bulldogs for a hard-fought effort in their first game of the season. “They had to overcome a lot of adversity with the weather and at halftime (not being able to go in the locker room). The guys battled the whole time. We did some good things and have to continue to improve each week.”

Andalusia remains on the road this week and steps up two classifications to face a tough team in Fairhope.

Taylor said, “Coach (Tim) Carter does a great job down there, and they have a really good program. Anytime you play a school that size, their numbers are going to be overwhelming, which I think was probably as much of a difference as any last year. In the third quarter, they were able to continue running some guys out there who were a little fresher than we were.”

According to Taylor, Fairhope also had a tough opening week opponent. “They played Spanish Fort to open in the season, who has been in the finals two of the last three years. That’s kind of like a rival game starting out, and they performed well. It’s one of those games, where it’s good for us to play because I think it makes us better in the long run. They’re not exactly who you would love to have the second week of the season, but it will be good for us,” he said.

Andalusia and Fairhope meet for the fourth time going back to 2012. The Pirates, which play in Class 7A, have a 3-0 lead in the series and have outscored the Bulldogs 90-60 in the previous three contests.

Andalusia returns to the site of the first game played between the two schools. The Pirates won that matchup 29-14 in 2012, but the Bulldogs have held their ground since then. The last two games have been decided by eight points or less.