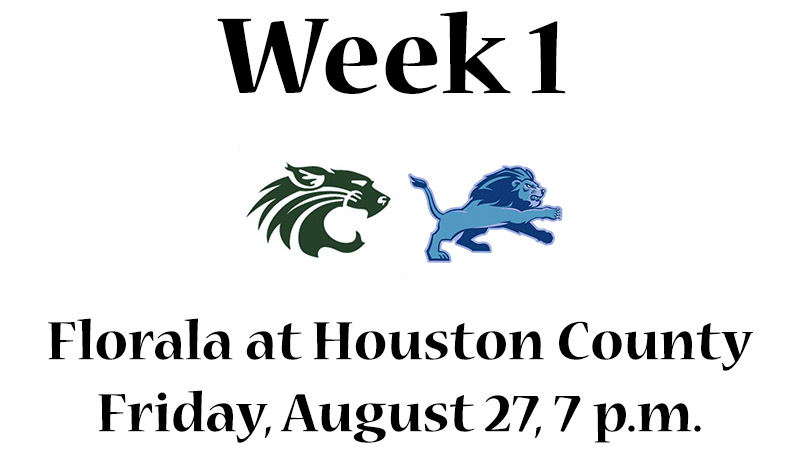 Chris Littleton enters his second year as head coach of the Wildcats and 10th year overall with a 38-57 overall record. FHS went 8-3 last season and finished in the first round of the state playoffs.

Florala was scheduled to play Zion Chapel last week at home in a preseason contest but was unable to take the field. Littleton said, “We had a good summer and a good fall camp so far. It is disappointing that we did not get to play our jamboree game, but I am sure that the kids will be ready to play. I am looking forward to a great test this Friday night to see what our guys do when the lights come on.”

The Lions come into the game after winning their season opener last week at Northside Methodist, 19-13. Chip Harris leads HCHS for the second straight year and is 85-86 overall in his 17th year as a head coach. This is Harris’ second stint with Houston County after he spent the 1997 through 2001 seasons there.

Despite the cancellation, the Wildcats are anxious to get their season started. Littleton felt it would be a good test for them. “Houston County has a good, well-coached football team. They are very athletic, and they play hard.”

After the teams alternated wins and losses in the first four games, Florala snapped a two-game losing streak in 2020 with a convincing 56-14 win at home.

While the trip will be a lengthy one, Littleton does not believe that will affect the team’s mindset. “It will be a long bus ride, but our guys are hungry and ready to play. I don’t anticipate it slowing them down,” he said.

The two teams meet for the eighth time overall and the fourth time in the last six seasons. The first two matchups between the teams were in the first round. Houston County won 35-14 back in 1984 while Florala returned the favor in 1997 with a 48-0 shutout. It was a region game on the schedule four years.

HCHS holds a slight 4-3 edge in the series and has outscored FHS 221-205 in the previous seven meetings.