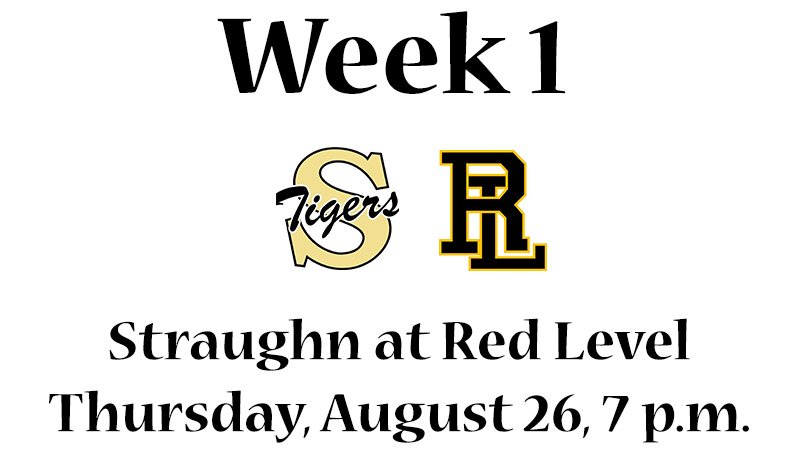 A blast from the past is ready for its latest showing when Red Level (0-0) hosts Straughn (1-0) for Senior Night at 7 p.m. Thursday, August 26. Seniors will be recognized prior to the game at 6:30 p.m.

It will be the 2021 season opener for RLS as Kenny Skipper leads the program for the fifth consecutive year. Red Level ended last season with consecutive wins and went 2-7 overall in 2020.

Skipper said they have a great start and have responded well to the heat so far. “It sure has been hot. We have been able to get a lot accomplished, and that says a lot for our players and their hunger to get better every day.”

All of the RLS seniors have been a part of the program since junior high, according to Skipper, and have a team goal for the year. “We want to be in the playoffs, and they are doing everything they can to make sure that happens,” he said.

He added that Straughn has a good football team, and coach (Ashley) Kilcrease will have them ready to play. Skipper said, “He does a really good job. We are excited about getting to start the season at our place. It has been a long time since Straughn has made the trip to Red Level.”

Straughn comes into the matchup after winning Kilcrease’s debut, 42-6, at Pleasant Home. “Looking back on it, we did some really good things, and we also have a lot to work on. Overall, our effort was good but not consistent. We have to learn to play every play. I thought we took some plays off mentally at some important moments, and we have to be more disciplined than that.”

Kilcrease said he only knows what Red Level did in the spring. “They are way more athletic than they have been and have some guys on offense that we have to contain.”

Playing a Thursday night game against a county rival will be a great atmosphere, according to Kilcrease. “We are looking forward to it. The short week does come into play, but we have done a good job so far adjusting.”

Last year’s showdown of the Tigers was the first contest since 2009 as Straughn earned a 19-0 shutout at home over Red Level.