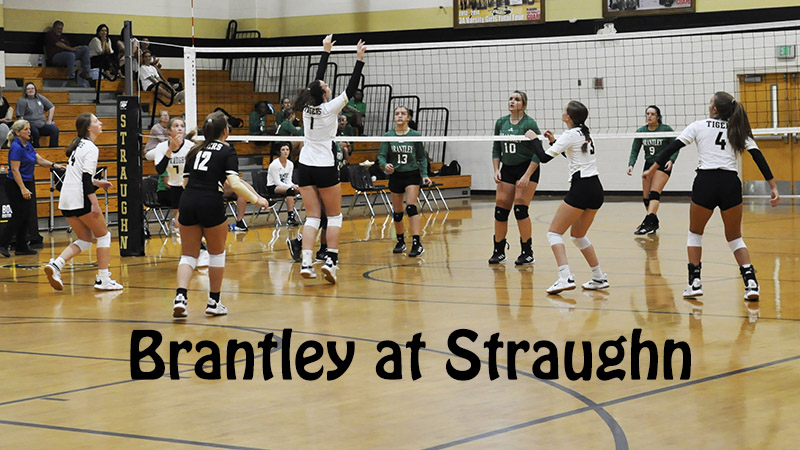 Straughn began its home schedule with a sweep over Brantley on Monday.

SHS Head Coach Deidra Burleson said the Tigers regrouped and completely changed their rotation after facing Andalusia in the first match of the season. “At the tournament in Kinston on Saturday, it worked since we went 4-1. We still have a few things we need to fix, but for the most part, I’m very happy starting the year out and am pleased. We are going to keep pushing from here.”

After Brantley scored the match’s first point, Ella Grace Wood gave Straughn a 2-1 lead, one that did not relinquish. Wood scored back-to-back aces to increase the margin to 6-2. Service errors plagued the Bulldogs in the opening frame, but they did not back down. Kills from Hannah Albright and Ora Hall kept the Tigers ahead by six at 11-5 and 12-6. Kayden Dunn brought BHS within four at 16-12 before a strong finish gave SHS a leg up in the match. Alyssa Richardson delivered a powerful kill to make it 23-17, and A.J. Singletary had consecutive aces to conclude the set.

Albright began the second set with a kill, and Katelyn Dewrell tacked on an ace for an early 2-0 lead. The Bulldogs had an answer and gained some momentum after building a 5-3 margin by a kill from Alex Grimes. Sheonte Barginere blistered a kill to push the score to 9-7, and the Tigers had trouble finding a groove. Dunn tacked on two more kills to help BHS build a 16-10 lead. Wood hit a kill to start an 8-1 run, and Kelsey Kelley delivered a kill to give SHS the lead back at 18-17. Brantley fought back to grab a 22-19 lead, but Straughn had the final say. Three kills by Wood and two from Hall closed out a 6-0 finish for a 2-0 lead in the match.

Wood continued to shine with a pair of kills for a 2-1 lead in the third set, but BHS had an answer and took a 7-4 lead. SHS took a timeout and quickly seized control back thanks to a 9-1 sprint. Albright was electric with a kill and two aces during the run, while Carlin Bates added a block to build the lead to 13-8. Hope Richardson drew Brantley back to 13-9 with a kill, but Straughn continued to accelerate and not look back. The Bulldogs were unable to overcome a strong 12-2 finish from their counterparts. Bates earned two more kills, and Singletary delivered an ace to stretch the margin to 21-10. Hall made it match point as an attack error gave the Tigers their fifth win in three days.

Burleson said her seniors are stepping up to lead the Tigers. Wood led SHS with 13 kills on 21 attacks and 5 aces. Albright had 4 aces with 11 assists, and Singletary picked up 3 aces and 6 digs. “I’ve been pushing them all summer that we have to have a leader. All of the girls are playing as a team, and they’re gelling (starting to talk), and it’s going forward from here.”