SHS runs away from Red Level with 38-2 win 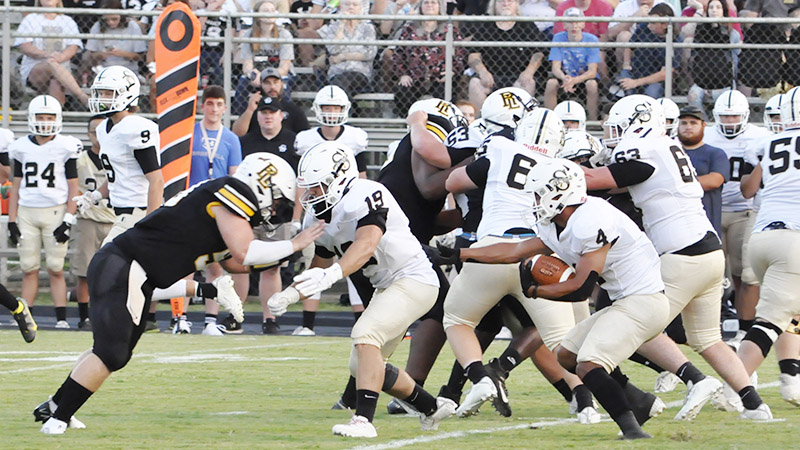 Straughn's Jaylon Guilford follows his blockers as he looks for an opening on a rushing play.

After a slow start by both teams, the Straughn Tigers (2-0) gained some second-quarter steam and earned a 38-2 win at the Red Level Tigers (0-1) Thursday night.

Straughn Head Coach Ashley Kilcrease felt his team showed improvement from the previous week. “We’re not there yet by any stretch, but I told the guys a team usually improves the most from the first week to the second week.”

He said they executed a lot better with both the offensive line and defense playing really well. “They are our engine on offense, and defensively, I thought our tackling was 100 times better tonight. I was really proud of the way we improved, but we start region play next week. We have a long road trip at a tough place to play and a lot of work to do, but I’m proud of where we are.”

Red Level Head Coach Kenny Skipper said his players showed good things despite the outcome. “You always have to work the kinks out in football that first week, and we gave them all they wanted for 19 minutes. It was a game before some bad things happened.”

He added his team did not respond to the adversity they faced. “We are going to win some football games this year with what we showed tonight. We don’t have a lot of depth, as about 14 guys never came off the field. We have to get in a little bit better shape and have work to do but did some good things tonight,” he said.

Straughn had two first-down runs by Jaylon Guilford before the first drive stalled. Red Level took over and got an 11-yard gain from Malikye Wright but also punted.

SHS took over and struck first on an 11-play, 77-yard drive. Aaron Olhava had a big 21-yard rush before a big fourth-down conversion. Jaylon Guilford ran around the left side from 13 yards for an early 7-0 lead with 2:06 left in the opening quarter. Brenden Bartholomew had the first of five successful PAT’s on the night.

Kentravious Likely and Wright helped move RLS 20 yards on its next drive before a fumble. Olhava began the second with a 3-yard run to double the lead to 14-0.

Wright had a big kick-off return in opposing territory. Three first downs later, Red Level was knocking on the door again before the fumble big bit a second time as Straughn dodged a bullet.

Abram Guilford threw a 24-yard strike to Nicholas Williams for a first down at midfield. After a 14-yard pass to Olhava, Abram Guilford found pay dirt on a 30-yard run for a 21-0 lead.

Likely gave RLS a first down with a 10-yard gash as three straight passes fell incomplete. SHS only needed two plays to score again as Olhava found an opening in the middle and blitzed 65 yards to the house. That put the halftime score at 28-0.

Javen Poindexter had a big 20-yard play for a first down on the third play of the second half. Olhava delivered an interception on defense allowing Straughn to score again.

Parker Black and Layne Grantham had big receptions to set up a 4-yard rush from Jaylon Guilford for a 35-0 lead midway through the third quarter. Neither side could muster much offense the rest of the quarter.

Early in the fourth, Grantham threw a 28-yard strike to Grant Barnes for a first down. Although RLS forced fourth down, Bartholomew converted a 27-yard field goal for a 38-0 lead with 9:42 to go.

SHS subbed in several younger players, and Red Level avoided the shutout with a running clock. Straughn had a bad snap and could not get out of the end zone forcing a safety.