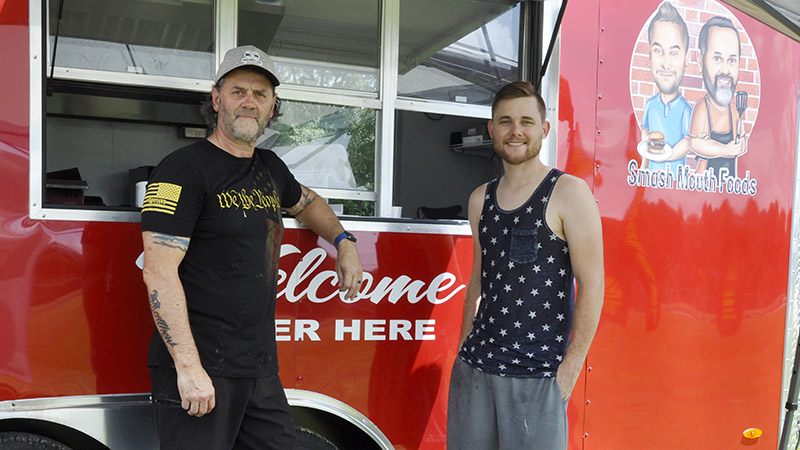 Tracy Hawsey, left, and his youngest son, Jared Hawsey, have brought Smash Mouth Foods to Andalusia. They own and operate the mobile food truck that offers unique takes on some of the typical fast foods.

Tracy and Jared Hawsey wanted to bring a one-of-a-kind food business to Andalusia though not in the typical sense. The father and son launched Smash Mouth Foods as a mobile food truck with homemade breakfast and lunch.

Jared said everything they do is homemade and cooked to order. “We get here at 5 a.m. and make our biscuits. We have them ready when we open, and they’re buttermilk completely made from scratch. What we wanted to do was take fast food and make it fresh, something new and different. The foods we have here fall in the same category as others, but ours are very unique. For instance, we have a burger and other people have a burger, but ours are different in the way we cook and patty them.”

Seeing as fast-food establishments offer typical burgers or biscuits, he added they wanted to do something not familiar to the City of Andalusia. “We wanted to do a food truck because it is unique and fun. We think it brings a little extra something to the city,” he said.

Smash Mouth offers a wide assortment of foods on its menu. In addition to biscuits for breakfast, Jared said they serve single and double cheeseburgers with all the fixings. “You can add anything to them: bacon, lettuce, tomato, pickles, and onions. We also have very unique thick hot dogs where we cook them up and slice them down the middle to make them crisp on the inside. Then, they get thrown on a bun and we can add our homemade chili, cheese, and relish, basically anything you want on it.” 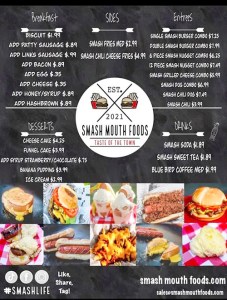 They also offer homemade desserts with assistance from a former bakery in Opp, which recently closed. “The owner still holds a license and does cheesecakes, so we buy them from her and sell them by the slice or the whole pie. We have banana pudding and plan to do homemade chocolate ice cream,” Jared stated.

They will not keep the same menu and offer different selections for different times of the year. He said, “We’re going to do some unique things during the fall when it gets a little bit cooler like camp stew to go with our grilled cheese. We’re going to mix it up.”

The name Smash Mouth was developed by their method of cooking burgers. Jared explained, “We do something with our burgers that makes them different than everyone else. We actually ‘smash’ them, where we take a patty in a ball, have your seasonings on it, throw it on the grill, and use what’s called a ‘smasher’ to smash it out thin. We get it really good and crispy where it’s coming off the side of the bun. There is a very unique flavor profile with the crisp on it, and it’s not your typical ‘gray meat’ burger like a lot of fast food places.”

Smash Mouth currently does not offer delivery but invites the public to check out their website and place an order there. They also have plans to attend festivals and events in the community. He said, “We’re going to do the Fall on the Square this year that Sweet Barn Fudge is putting on. We will also be at Andalusia Elementary School, where they want us to come next month.”

Their goal as a food truck is to get people in and out and fast as possible, according to Jared. “We don’t want people sitting here waiting. We want them to be able to order their food and get it out to them in a timely manner. We also recommend ordering through our website,” he said.

Right now, they are only open in Andalusia, but the plan is to expand more with additional food selections. “We would love to open up more locations. We would love to add a taco truck one day. I would even love to open up in the evenings. In a few years, we hope to have several trailers out there and franchise out a little bit. Other people may want to use our brand and recipes and stuff like that.”

Jared said there is a reason why they do not have plans to become a storefront instead of their food truck. “That’s part of the nostalgia of it. We’re a food truck that is clean and tidy. We’re going to eventually put out some picnic chairs and have plenty of shade. We want it to be a neat place to come sit down in a beautiful part of Andalusia that gets a lot of traffic.”

Smash Mouth Foods is located next to Andalusia Animal Clinic at 741 Copeland Drive and is open from 6 a.m. to 2 p.m., Monday through Friday. For more information visit their website at smashmouthfoods.com or go to their Facebook page under the same name. “We may expand on our hours in the future. We’re just really excited to be here in Andalusia,” Jared said.