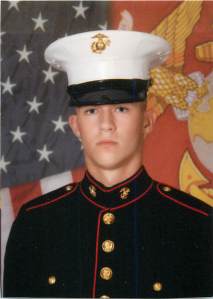 While in recruit training, PFC Foshee achieved the classification of Expert Shooter, as well as scoring in the first-class tier of physical and combat fitness training. He was selected by the series commander to carry the Lead Series Guidon, which represents three training platoons throughout training when won by PLT 3058, and to carry it for the Company graduation ceremony.

Upon graduating, PFC Foshee was one of four recruits in his platoon to earn a meritorious promotion from Private to Private First Class. Following Boot Camp, PFC Foshee will report to Camp LeJeune to attend one month of Marine Combat Training before reporting to his Marine Occupation Specialty school.

He is the son of Winston and Michelle Foshee of Red Level.