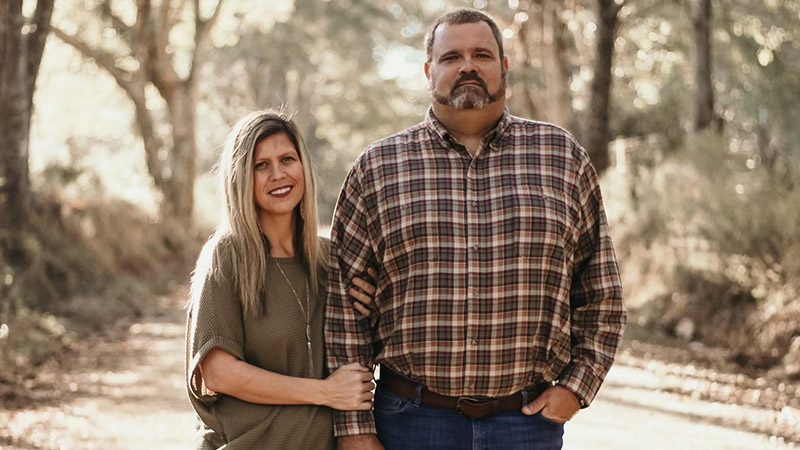 Adam and Christy Turner are the new owners of Golden Rule BBQ and Grill in Andalusia.

One of Andalusia’s most popular restaurants, Golden Rule BBQ and Grill, is in full swing under new owners Adam and Christy Turner.

Turner said she met with the previous owners, John and Shelly Tomberlin, about taking a part-time job at Golden Rule.

“Shelly has been one of my lifelong friends. I’ve worked in the restaurant industry before and really enjoyed it, so she let me help her.” She has worked at the restaurant since day one in October 2017. “I did not want to see the restaurant shut down. When John was looking to do other business adventures, we decided to keep it going with the good food we have,” she said.

Working in the restaurant industry is nothing new to Turner after starting at a young age.

“I got a work permit when I was almost 15. Andy Little hired me at Subway, and by the time I was 16, he allowed me to become the shift leader. After that, I went to work at Steamboat, where I was a shift leader at night. I’m a people person and like to talk to people and interact with the public,” she said.

Turner believes it is essential to build relationships with customers and offer them great service.

“That’s the way you live, and when you have good customer service, they keep coming back. If you don’t have that, you won’t have a business. It’s very important to treat your customers right,” she said.

Since the restaurant took on its new ownership, there are a few changes in the works.

“We will be adding alfredo to the menu and a sweet potato to our list of sides. The buffet will reopen after closing last year due to strict mandates set in place due to the pandemic. That has been a big thing, and people have been waiting for it to return,” Turner said.

Golden Rule’s buffet will be open on Sundays beginning Sept. 5.

Turner said they have had discussions about a future name change. “So many people tell us the reason they don’t stop is because the name Golden Rule is misleading. We want to broaden our name and make it a little more special to us. We want to make it known that we are not just barbecue, and we do a whole lot more than that.”

She hopes Golden Rule is bigger and better in the coming years. “We hope we have branched out and have live entertainment. We want to have more family-oriented activities.”

Turner feels Southern hospitality is important in the restaurant industry. “I’m from the South and like to smile, talk, and be friendly. I expect everybody who works for me to be the same way.”

“I have some of the best waitresses in Covington County. They are outstanding and do a great job. Sometimes, we will have a slip-up, which is normal, but they all get along and are great at teamwork. We have some great cooks in the back who give me a lot of hours. A lot of people don’t realize how hot it is, but when you’re working around a pit and a grill, it’s a hot job. They deserve every bit of credit they get and do an outstanding job.”

Being a team player makes a big difference, according to Turner. She said, “If you only do you, it’s not going to help you or the team. No one person can do it all. When we work together, more people see it, and it helps us get everything we need done. Teamwork is important if we want to be successful.”

Turner felt her restaurant experience along with her husband’s work behind the scenes make them a good fit in their new roles. “He cleans and does all of the drain work and electric work to help keep the restaurant running, while I oversee everything from an operations standpoint.”

She acknowledged her daughter’s involvement at the restaurant. “She has taken on a big role as one of our full-time employees while attending Troy as a full-time college student. I almost want to cry because of everything she does. She orders all the food for us, manages the front staff, and does all of our employees’ timesheets and scheduling. She keeps the front running and does an immaculate job. I’m very proud of her.”

Adam and Christy Turner reside in the Antioch community and have three children: Meagan, Mason, and Micah.