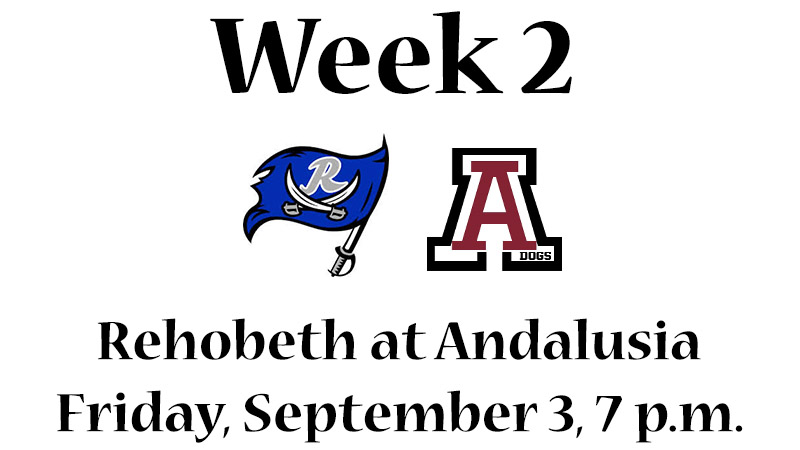 With two road games in the books, Andalusia (1-1) returns home to face Rehobeth (2-0) at 7 p.m. Friday, Sept. 3. It will also be Senior Night, as players, cheerleaders, and band members will be recognized at 6:30 p.m.

The Rebels will be playing in their third straight road game to begin the season. Last time out, RHS won, 16-6, at Ashford. The Bulldogs entertain the home crowd for the first time this year. Last week, AHS went up against 7A Fairhope and was shut out, 28-0.

Head Coach Trent Taylor said Rehobeth would be another strong opponent for the Bulldogs this week.

“They are playing extremely well, and last year’s game was probably one of the tougher ones we had in the regular season. Their head coach Pate Harrison does a tremendous job. After having a lot of success at Elba, he has gone to Rehobeth and has those kids believing and doing really well.”

He added his thoughts on being back in Andalusia after the Bulldogs had a pair of difficult road games to start the year.

“There’s no doubt we are glad to be home. It is very nice not to have to pack up and go somewhere.”

Taylor praised this year’s senior class for the leadership and skills they bring.

“They are a great group of guys. Like the ones before them, they have worked extremely hard. They take a lot of pride in what we have here at Andalusia and what we’re trying to do with our program. It’s a really special bunch,” he said.

Pate Harrison leads Rehobeth for the second straight year with a 9-4 record. Harrison is 63-31 overall in nine seasons with prior stops at Dale County and Elba.

Andalusia won the first-ever meeting between the two teams in 2020 with a strong second half. The Bulldogs held a slim three-point lead at halftime and scored three touchdowns to defeat the Rebels, 38-22.