PHS Head Coach Tony Wilson said his team played well. “We had some spots we have to work on, but we had a lot of bright spots. We were flat on our passes tonight and made up for it in some areas. I knew it was going to be tough coming in tonight because Kinston has a very good ball club. They are very well-coached, and we have a lot of respect for them.” 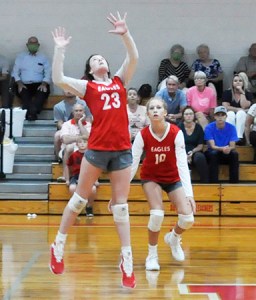 Hailey Ward, left, prepares to set the ball as Bailey Johnson keeps a close eye on the play. The Eagles rallied back for a 3-2 win over Kinston in the first area match of the season for both teams Tuesday night.

He felt his girls would learn from the match, win or lose. “I thought it was a great match, and I really appreciate the effort my girls gave. We were just pleased to get the win,” Wilson said.

Amy Garner picked up two kills to give the Eagles an early 4-0 lead in the opening set. The Bulldogs fought back to tie the score 4-4 and took an 8-7 lead. Garner collected three aces during a five-point spree to give Pleasant Home a 12-8 lead. However, Kinston answered back with an 8-0 run and grabbed a 16-12 margin. Meredith Wilson then cut the deficit to 16-14 with a kill and an ace. Hailey Ward delivered an ace to break even at 18-18, but Faith Peters had a powerful kill to make it 20-18. KHS took a 22-21 lead until PHS scored the final four points for an early lead. 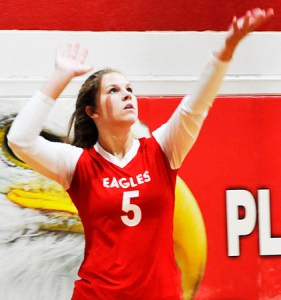 Amy Garner follows through on a serve.

Ward started the second set with a kill before Lexi Straughan added an ace for a 2-0 lead. Pleasant Home kept momentum on its side as the advantage grew to 7-1. Ward picked up another kill for a 12-6 margin. Sydney Smith used an ace while Peters added two more kills as Kinston rallied with a 9-0 surge for a 15-14 lead. It was short-lived as Ward executed a pair of aces to give the Eagles an 18-17 lead. The Bulldogs had the final say with a strong 8-2 finish to even the match.

KHS had the upper hand in the third set with a 4-2 lead. Marion Bradley then had a mighty kill, and Emily Taylor executed an ace for a 4-4 tie. PHS managed to keep the action close with a 7-7 tie before the Bulldogs began to pull away. Danielle Cain executed an ace for a 16-10 lead. The Eagles were able to get within three at 18-15 but could not draw closer. Three more kills from Peters along with an ace by Madison Moore closed out the frame.

Both teams were neck and neck in the pivotal fourth set. Garner and Wilson each used a kill to give Pleasant Home an 8-6 lead. Wilson added two more to push the score to 12-10. Another kill by Peters and an ace from Smith allowed Kinston to retake a slim 15-14 lead. The Eagles responded with a 7-3 surge for a 21-18 lead and were poised to even the match. Blair Wyrosdick gave the Bulldogs hope with a kill, but it was not enough as the stage was set for a decisive fifth set. 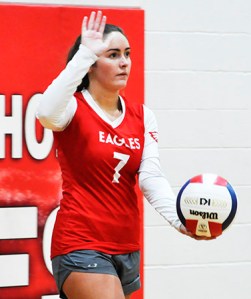 Lexi Straughan focuses on her opponent as she prepares to serve the ball to Kinston.

With everything on the line, PHS took a 3-2 lead and seized complete control with an 8-0 run. Taylor made it rain with four aces as Wilson used a block, and Garner blistered a kill during the surge to keep KHS in check. Peters stopped the bleeding with a kill to make the score 11-3. Kinston staved off two match points until Wilson had a kill and closed out the incredible comeback for Pleasant Home.