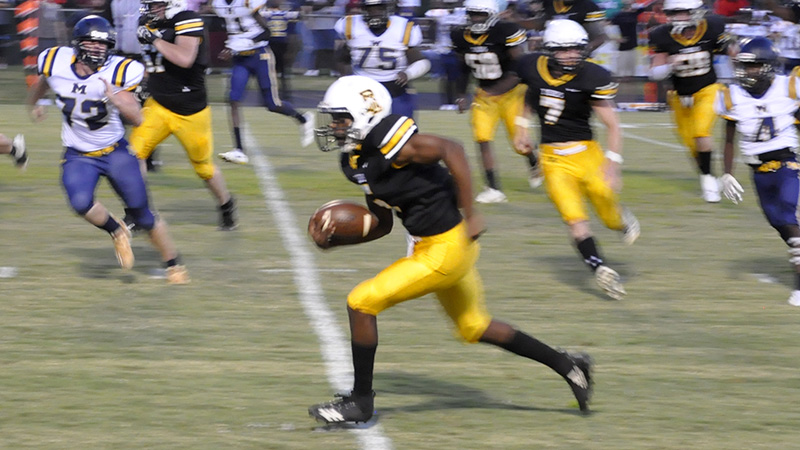 Red Level junior quarterback Malikye Wright finds an opening and races to the end zone for a touchdown.

Red Level built a big lead and held on down the stretch to win the region opener over McKenzie, 34-24, Friday night.

RLS Head Coach Kenny Skipper said he knew his team was a lot better than the previous week. “We turned the ball over and made a lot of mistakes, which a lot of teams do in the first game. We got those wrinkles out tonight and had the guys out there who wanted to be there. They did a great job against a dang good McKenzie team and finally believed me when I told them we had a good football team. Dominic Williams had a career night and Malikye Wright and Kentravious Likely played well.”

Skipper added that the offensive line blocked better than they have the last two years.

“We just got after them and played football for 48 minutes. It feels pretty good to win against the #7 team in the state,” he said.

Red Level (1-1, 1-0 1A Region 1) began its first drive at the 44 as Malikye Wright threw a 29-yard strike to Javen Poindexter. Wright then picked up another first down on a 12-yard run. Dominic Williams capped the drive with a 2-yard touchdown run. Kennith Huckabaa added the PAT for a 7-0 lead.

Jamari Brown then recovered a McKenzie fumble on third down. Wright used a spin move and raced 32 yards to the house for a 14-0 lead. The home defense rose up and forced MHS into a three and out. Kentravious Likely tallied the initial 13 yards of the next drive before RLS fumbled the ball.

McKenzie (1-1, 0-1) took advantage of the miscue as Kamern Daniels cut the lead to 14-6 on a 2-yard run. Wright threw a huge 36-yard pass to Poindexter and then found the end zone on a 4-yard run. McKenzie went three and out as Red Level led 20-6 at halftime.

The visiting Tigers were once again held at bay with another quick series to begin the third quarter. Poindexter gashed 17 yards for a first down before Likely moved the chains with a 20-yard rumble. Poindexter capped the six-play drive with a 15-yard touchdown run after eluding a defender for a 27-6 lead. Zanderion Cook had a big run on the next drive for McKenzie and set up a 20-yard touchdown by Jahmarren Jackson.

That left the score 27-12 after three quarters. Williams then took the spotlight with a 39-yard pick six to pad the Red Level lead to 34-12 with 8:41 to go in the fourth.

MHS needed less than two minutes to find the end zone again. Daniels scored a 5-yard touchdown run with a 9-yard run and trimmed the deficit to 34-18. After forcing RLS into a quick three and out, Jackson hauled in a 24-yard touchdown grab. Poindexter wrapped up the contest with a 13-yard run and a first down.

Red Level travels to Kinston Friday, Sept. 10 for a region battle with the Bulldogs.