Remember When: ‘Welcome to Andalusia’ 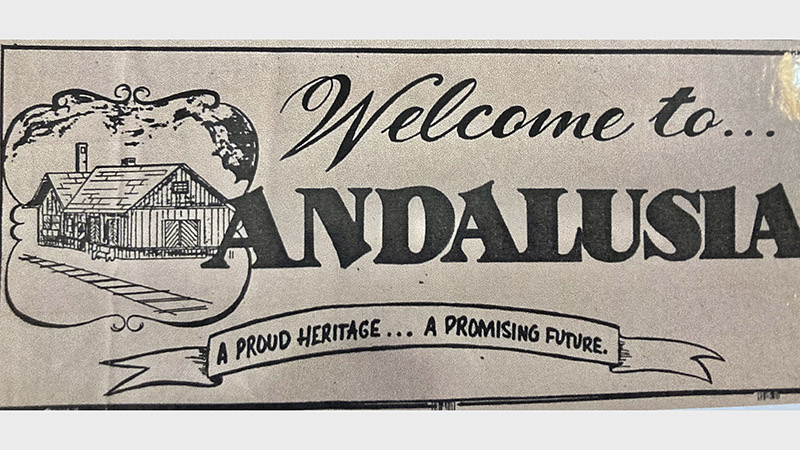 In the early 1980s when the “historic preservation” movement came to Andalusia, there was much interest in restoring, preserving, and converting the Central of Georgia train depot for a new use. This project was first suggested by the head librarian of the Andalusia Public Library, Margaret Studstill West.

The Covington Historical Society was founded in 1976 during the American Bicentennial Year that celebrated the country’s 200th anniversary. The library had collected a number of old Andalusia photos that consisted of homes and business scenes that were turned into a slide presentation. This presentation was shown to many civic clubs and organizations as part of commemorating and celebrating our country’s history.

A great deal of interest was stirred up. Items started showing up from citizens’ attics and garages and basements that were given to the library with the thought of preserving Andalusia history. Librarian West made it known to historical society members that the library really did not have the room in the library facility for historical artifacts but posed the question, “Why not establish a history museum?” CHS members were enthused.

The oldest wooden building in the downtown area was the old Central of Georgia depot that was built in 1900 at the turn of the century when the train line was extended from Searight. The train reached the town in September of 1899 and the depot was completed around the spring of 1900. The local economy’s progress after the new form of transportation arrived turned a village into a town.

Many citizens in the late 1970s and early 1980s thought the unsightly structure should be torn down, but the society began turning its efforts toward buying or leasing the depot property from the railroad with the hopes of opening a museum in that building. Eventually, the REA (AEC) and its entity the Andalusia & Conecuh Railroad Co., Inc., acquired title to this landmark property. On May 1, 1983, the A & C Railroad leased the depot and parcel together with parking spaces around the building to the Covington Historical Society with certain terms and conditions. A new project was born that led to other downtown revitalization.

The society sponsored fund raisers and encouraged contributions and donations. Citizens and civic clubs responded which helped to raise an initial $80,000. for restoration work. Many volunteers helped to establish the museum. The Three Notch Museum opened its doors to the public in June 1988.

About 10 years later, some additional property in an addendum to the lease expanded the property in order for the society to locate other permanent fixtures and buildings on the leased property. These included a log cabin, a corn crib, a country store, and an historic post office.

Since the mid 1980s, the museum has accepted artifacts that are displayed in a variety of themes such as farm and farming implements, business, church, school, river, military and war, sports, railroad, Indian, pioneer, bottles and jugs, textile, political, and other memorabilia. The Mark Gibson model train exhibit is located in the boxcar. The River Falls Post Office, the Clark family log cabin, the H. B. Little Country Store, and two cabooses are all located on the museum grounds. A treasure of old Andalusia and Covington County photographs are popular with visitors and especially those doing research about the city and country history along with searching information about family history.

The Three Notch Museum is a tourist attraction that visitors enjoy as they arrive each year from a number of states and even foreign countries. The society has been fortunate to have the support of the City of Andalusia, the County Commission, donations from civic clubs, memorial contributions, and to be the recipient of various grants through the years.

There are plans to expand in the near future since the displays are crowded and artifacts continue to arrive. There is always a need for people interested in our hometown museum to volunteer their time in welcoming visitors and telling stories that range from famous Andalusians to Three Notch Trail markers to corn cob mops to ornery mule bits to the official City of Andalusia flag.

Andalusia has always been a place to welcome newcomers and visitors. More than likely, people will be coming to “the heart of South Alabama” to live temporarily or permanently in the aftermath of Hurricane Ida. I Remember When they came to town from the New Orleans area after Hurricane Katrina.

Now is the time for all good citizens to say “WELCOME TO ANDALUSIA” and to help those who need a friendly place to call home – A PROUD HERITAGE…A PROMISING FUTURE.

The billboard signs pictured here are approved designs that came from the Historic Committee of the Andalusia Chamber of Commerce in the late 1980s. Found recently in a file, I offer them as a gesture of “welcome” to newcomers and visitors alike.