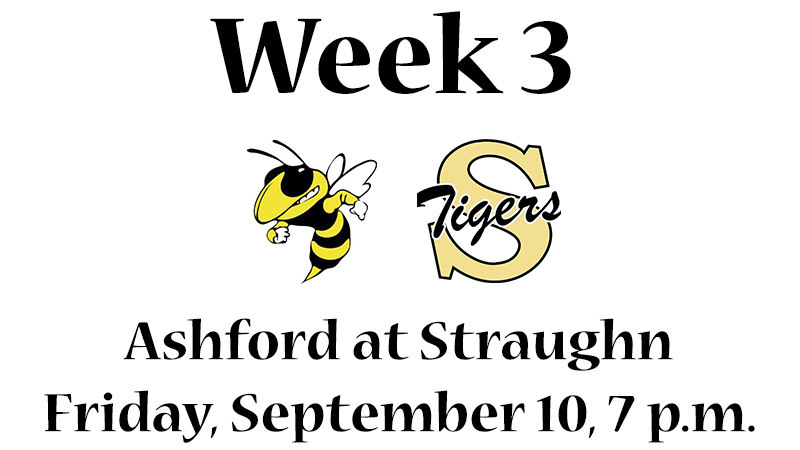 Both teams opened the region schedule on the road last week. The Tigers made the trip to Bullock County and turned in a 47-20 rout. The Yellow Jackets fell at Dale County, 36-14.

Head Coach Ashley Kilcrease said his coaching staff was really proud of the team for finding some difficult challenges on the road. “Being down in the third quarter and winning by 27 says a lot about our toughness and fight.”

He added the team’s feelings about playing at home for the first time this season. “We are really excited about coming home this week to play at our place. We expect a great crowd and need them to show up and be loud,” he said.

Straughn returns to the road next week.

Despite not winning the first two games, this week’s opponent should not be taken lightly. Kilcrease stated, “Ashford is very well-coached and has some good skill guys that we will have to contain. I expect a close game that will be decided late.”

Robin Tyra is in his 14th year coaching and leads Ashford for the second consecutive season. He has a 60-81 overall record and is 2-10 with the Yellow Jackets.

This contest will mark the sixth time the two teams have met. SHS has a 5-0 lead in the series going back to the 2010 season and has outscored AHS 120-21. The Tigers have shut out the Yellow Jackets three times and laid a goose egg on their region foe in the two previous matchups at home.

Straughn made the long trip to Ashford last year and collected a 19-0 win. SHS finished with 292 total yards and 19 first downs while the defense held AHS to -12 yards on offense and only a pair of first downs.