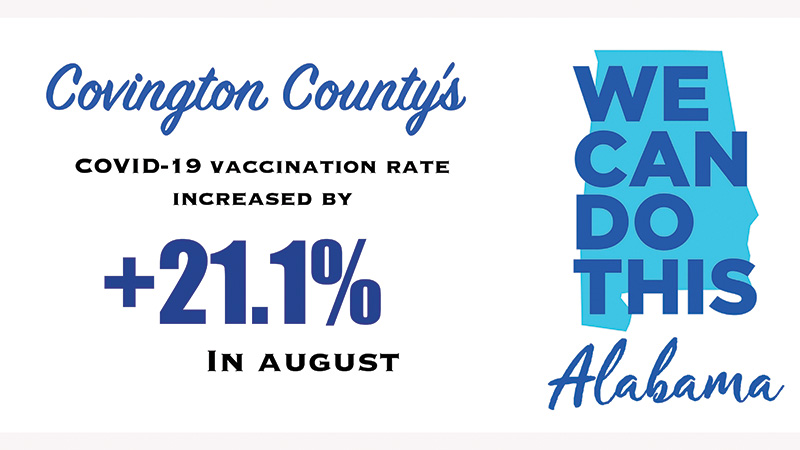 Covington County is among only six counties to meet the goal for We Can Do This Alabama, a statewide grassroots effort to encourage COVID-19 vaccinations.

Andalusia Mayor Earl Johnson joined 55 other mayors across the state in accepting the challenge to increase the number of people getting vaccinated by 20 percent before Labor Day. Johnson was among only six mayors to hit that goal.

“We were pleased to learn this morning that Covington County had one of the six highest increases in vaccine rates in August,” Johnson said. “As of (Wednesday) morning, 39.2 percent of the county’s population has had at least one dose of the vaccine, and 32.6 percent were completely vaccinated, which is a 5.1 percent increase since the beginning of August.

“While those numbers are encouraging, we cannot rest on them. During that same time, there have been 1,168 new cases of the virus in Covington County and at least 13 more deaths from COVID-19. That number might be higher, as there is a two-week delay between the time of death and an update in the Alabama Department of Public Health’s official numbers.

“We are seeing an increasing number of pediatric cases, and on Tuesday, there were 28 people hospitalized in Covington County with COVID-19. Only three had been vaccinated.”

The mayor also expressed his appreciation to Alan Cotton for his efforts to encourage people to get vaccinated.

“I cannot say enough about what Alan has done. He continues to supply white roses in memory of his wife, Angie, to anyone to participates in a vaccine clinic. Angie died in July, just 10 days after being diagnosed with COVID, and Alan doesn’t want anyone else to face what he and his family have been through.”

“We are very grateful to the mayors who participated in the challenge,” said Donald E. Williamson, MD, president of the Alabama Hospital Association. “We urge all mayors and local leaders to continue encouraging vaccinations as this is the most important weapon in stopping the spread of the virus.  The leadership of these men and women is critical in ensuring the health and safety of their communities.”

In total, Alabama saw a 14 percent increase in vaccinations from the start of the challenge in early August through Labor Day. A full list of participating mayors can be found here.