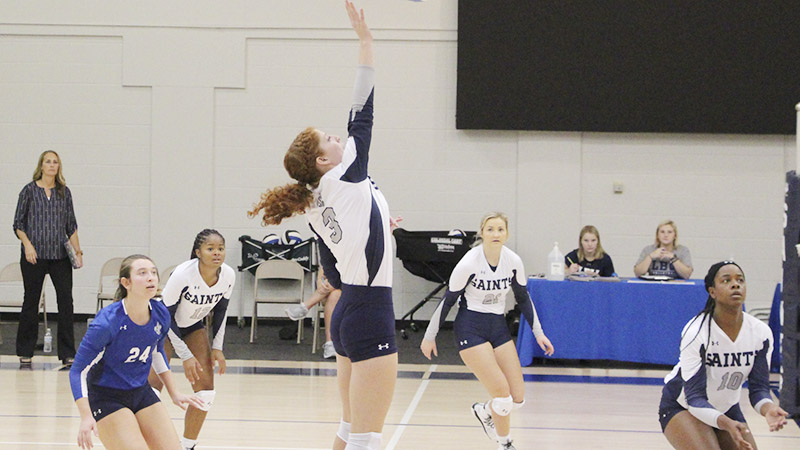 Ashton McCullar, center, goes up to make a kill on a play during LBWCC's first-ever home volleyball match. The Saints had no trouble sweeping Southern Union Community College, 3-0.

A day for the history books turned out well as LBW Community College took down Southern Union State CC with a 3-0 sweep Friday afternoon.

Saints Head Coach Janie Wiggins said she felt “super” excited to see her team perform in a match like they show up at practice.

“To be able to overcome the pressures of being the first team here and everything that comes along with it, they put that pressure on themselves. They channeled that really well today, and I think they’re starting to come together as a team,” she said. 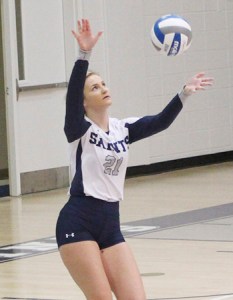 Caleigh Davis focuses on the ball as she prepares for a serve to Southern Union.

Wiggins added it was the first time they had seen Southern Union. “I had heard they would come back strong, so I kept reminding the girls don’t let your guard down and just keep pushing hard to play our game. Remember the goals we set, and that’s what we tried to stay focused on. We didn’t want to worry about what they were doing but what we were set out to do.”

LBW (2-4, 1-2 Alabama Community College Conference) shot out to a quick start in the opening set. Alex Green picked up an ace for a 2-0 lead, and Jaden Williams came up with a kill to make the score 3-1. After Southern Union (2-2, 2-2 ACCC) closed the gap to 5-3, the Saints went on a torrid tear to take complete control. Maddie Rasmussen delivered a kill and an ace while Brianna Wilson used a pair of kills to help push the lead to 14-6. The Bison were unable to overcome attack errors and mistakes and fell further behind at 21-9. Haley Lewis had an ace to cut the deficit in half at 22-11, but it was not enough as LBW took its first home set, 25-13. 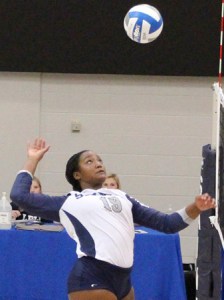 Jaden Williams braces to make a big kill during a rally.

The Saints duplicated their feat in the second with a strong opening. Kamira Cooper gave them a 4-0 lead with a kill, and Green stretched the score to 6-0 with an ace. The Bison called timeout to regroup but still had a mountain to climb while facing a 10-1 gap. Caly Carlisle earned a kill for Southern Union to bring the score back to 12-5. Wilson hit a kill right back to start another big run for LBW. Ashton McCullar delivered an ace and a kill as Rasmussen added an ace to build the lead to 22-6. Cooper brought the heat with a powerful kill to close out the lopsided set, 25-9.

Alex Green began the third set with an ace as LBW once again opened on a good note with a 3-0 margin. Raeden Gagliano brought Southern Union back to 3-2 with a kill. Asiah Wiggins kept it close for the visitors with a kill to make the score 5-4. That woke up the Saints who reeled off a 6-0 surge capped by a kill from McCullar. Rasmussen hit an ace to push the score to 14-6 and force another timeout. It seemed like the call worked for the Bison who made things interesting. Ann Margaret Keener had an ace, and Gagliano put up a kill to close the gap to 17-14. Caleigh Davis responded with a kill and an ace for some breathing room. Kills by Cooper and McCullar helped LBW build a 22-17 advantage. A big block took the contest to match point, and Wilson earned the final blow with a kill to win, 25-19. 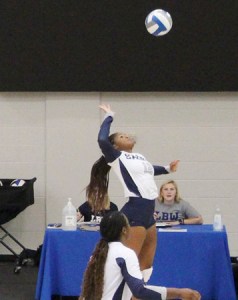 Kamira Cooper kept the Bison off balance the whole time while leading the Saints in kills for the day.

Cooper led the Saints with 7 kills and 7 digs. McCullar was next at 4 kills and 6 digs. Williams had a team-high 5 blocks and 3 kills while Davis and Wilson both earned 2 blocks. Rasmussen chipped in 18 assists and 6 digs. Green and Davis both paced LBW with 3 aces each.