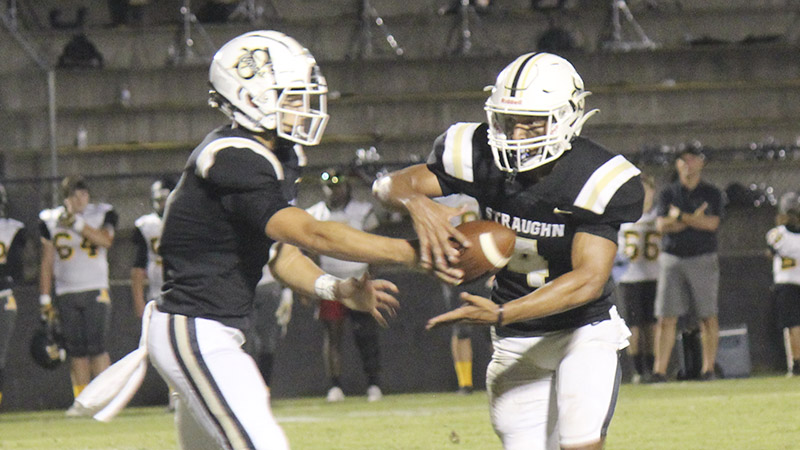 Straughn's Abram Guilford hands off to his younger brother Jaylon Guilford for a run play. The Tigers remained unbeaten on the season with a big win in their first home game of the season.

The Straughn Tigers blitzed Ashford with a powerful passing game in their first home game for a 42-20 win Friday night.

Head Coach Ashley Kilcrease thought his team started out well. “I love the way we came out and thought it was the best we had done so far this year. They were giving us a lot of stuff on defense that was hard to run, but I thought we did a good job of capitalizing on the passing game. That’s what good teams do, and we were able to throw the ball tonight when they took the run away from us,” he said.

Kilcrease added they have to do a better job in the second half and felt that was the only negative. He said, “We have to finish games, and next week, we go to a good program and look forward to the opportunity.”

Straughn (4-0, 2-0 4A Region 2) began the game on its own 49 and went right to work. Abram Guilford threw a 40-yard touchdown strike to Micah Turner on the fourth play of the opening drive. Riley Brooks found Logan Arnett for the two-point try and a quick 8-0 lead. Ashford (0-3, 0-2) was stopped on defense, but the Tigers followed suit. The Yellow Jackets finally picked up a first down on a 20-yard run but ran out of steam. SHS took over and earned two first downs before a punt. After an AHS fumble, Jaylon Guilford ran 22 yards to the end zone. That gave the hosts a 14-0 lead after one quarter.

Following another defensive stop, Abram Guilford found Aaron Olhava open for a huge 51-yard gain into AHS territory. Four plays later, Jaylon Guilford had a 3-yard touchdown run, and Brenden Bartholomew gave SHS a 21-0 lead. Neither side posed a threat on the next two possessions. Ashford coughed up the ball again as Brooks recovered it. Straughn only needed two plays and 45 seconds to strike again. Jaylon Guilford found an opening and extended the Tigers’ lead to 28-0 with another 22-yard touchdown. The Yellow Jackets drove to end the half but came up short with an interception by Olhava.

The Yellow Jackets began the second half going backward. On fourth down, Wyatt Smith recovered a fumble and took it 4 yards to pay dirt that extended the lead to 35-0. The Tigers took over on offense and got two first downs before their own fumble. Jalen Smith then had the biggest play for Ashford with a 64-yard run before a 3-yard touchdown. The score remained 35-6 after three quarters. Straughn started the fourth in good shape before another fumble. D’ryus McCarter gashed 51 yards for another score. The two points cut the deficit to 35-14.

Abram Guilford found Parker Black on a 20-yard gain to start the next drive. Three plays later, Olhava hauled in a big 47-yard touchdown reception, and Bartholomew made it 42-14 with 8:45 left. AHS took over and used nearly 7 minutes to score the final points. Smith had a 5-yard touchdown, and the conversion was no good. SHS ran out the clock to seal the region win.