Dr. Mark Goto is the latest addition to the local healthcare community as an ear, nose, and throat specialist at Mizell Memorial Hospital.

Originally from Fresno, California, Goto currently also works in St. Joseph, Missouri, in addition to Mizell. He spent most of his time in Florida before coming to Opp. 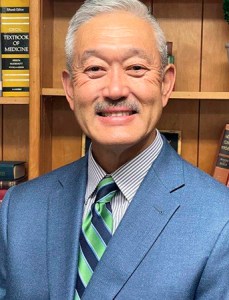 “I worked for two years in a private practice in Pensacola after retiring from the Navy. While in the Navy, I also worked at Brooke Army Medical Center for two years. I worked at the Naval Hospital in Pensacola for over 10 years. Two of my four children were born there.”

When he finished his residency in Ear, Nose, and Throat at Bethesda Naval Medical Center, he worked overseas in Okinawa, Japan.

His decision to go into the medical field started during his adolescent years. Goto said, “My parents instilled in me the purpose of serving the Lord and through that, my fellow man. I took a job aptitude test in junior high school, and the results suggested I should become a physician or clergy.”

He liked the idea of those final results, and it ultimately led him to becoming a doctor. “While it was imperfect, I could work to provide healing and health to my patients.”

Goto’s primary focus now is otolaryngology (ear, nose, and throat) in addition to working with patients who have allergies. He has been a doctor for 24 years after graduating from medical school at the University of Pittsburgh in 1997, where he holds an M.D. degree.

He stated he is the first and only physician in his family. He shared his upbringing and thought highly of his parents for everything they did to help him. “My mother was a ‘homemaker’ and then worked as a school cafeteria cook when my younger sister started junior high. My father worked many jobs while I was growing up. When he was a teenager, he picked cotton and raisin grapes. When I was born, he drove the school bus for the elementary school,” he said.

Goto said his father drove Randy Williams to and from school when he was a young boy. Williams was notable for being an Olympic Gold medalist in the long jump in 1972. He added that his father was his inspiration. “He had a willingness to be there and help anyone, day or night. He also worked as a dental technician and was in charge of the grounds of the junior college and football field in my hometown when he finally retired.”

While living in Fresno, Goto said his uncle and extended family all farmed. “Fresno is an agricultural area and the ‘bread basket’ of California. My family would brag that the area grew more cotton than Alabama and more peaches than Georgia,” he said.

His opportunity to work a few days a week in Opp came about during the pandemic. Goto said, “Unfortunately, an ENT at another hospital in the area died of COVID during the quarantine. I was out of work for the first time in my life and offered to help there. Eventually, the CEO of that hospital introduced me to Kerry Goff, the CEO at Mizell Memorial.”

It had been a few years since Mizell had an ENT on their staff and they were in need of one. Goto said, “When I visited Opp and Mizell, I was impressed by how the staff worked so hard together as a team and also how happy and friendly they are.”

Goto currently has openings through November. Mizell Memorial Hospital is located at 702 North Main Street in Opp. For more information visit their website at www.mizellmh.com or call 334-493-5704.