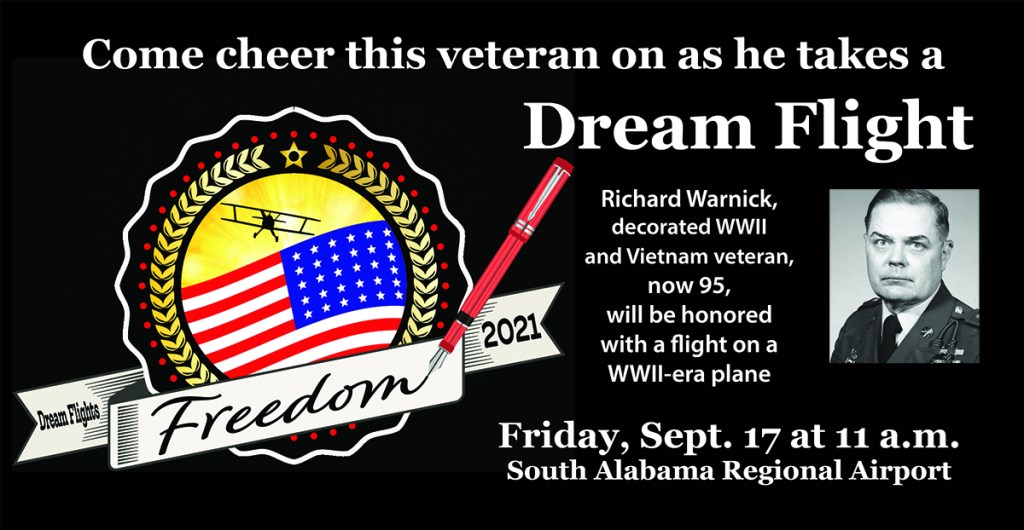 Seventy-seven years after his military career began, decorated World War II and Vietnam veteran Richard Eugene Warnick, 95, will be honored this week by the Dream Flights organization with a flight in a vintage aircraft.

Dream Flights is a national organization dedicated to honoring military veterans and seniors with the adventure of a lifetime: a flight in a Boeing Stearman biplane. 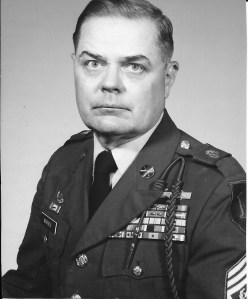 Dream Flight pilots are bringing a Boeing PT-17 Stearman to the South Alabama Regional Airport, and plan to take Warnick, who lives in Horn Hill in Covington County, on a flight this Friday, Sept. 17, at 11 a.m. The public is invited to cheer him on at the airport terminal, located at 21861 Bill Benton Lane, Andalusia.

Warnick joined the Navy at age 17 to beat the draft and have a say in which branch of the U.S. Armed Forces he would serve. He went on to serve as a smoke boat operator during the battle of Okinawa, creating smoke to make it difficult for the enemy aircraft to lock onto their targets. He made it through WWII unharmed and was eventually discharged when the war was over.

After his discharge, he used his GI Bill benefits to help pay for flight lessons, pursuing his lifelong love of aviation. Before he completed his licensing, he was laid off from the company for which he was working and could no longer afford the lessons.

After a year in civilian life, Warnick re-enlisted, this time in the U.S. Army. After a tour of Italy, he re-enlisted in the U.S. Air Force and was stationed in Turkey. When his father died, he received a compassion reassignment, and returned to the States to help his mother relocate.

Once she was settled, he returned to his favorite branch, the U.S. Army. He was stationed in Germany during the Korean War. It was in Germany that he met Phyllis, a former U.S. Army drill sergeant who would become his wife.

When the Vietnam War began, Warnick volunteered. But in Vietnam, the luck he enjoyed in WWII ran out. Warnick was embedded with the South Vietnam Army on a search and destroy. Mission when the unit fell under attack. The only other American with the unit was killed, and Warnick caught shrapnel in his leg.

After being treated in the Philippines, he returned to Vietnam. He was again injured, this time when a grenade left shrapnel embedded in the left side of his face. During his second tour of Vietnam, he had reached the rank of Command Seargent Major, and oversaw his own unit. While on a mission with a group of APCs (Army Personnel Carriers), the APC in which he was traveling was targeted with a land mine. He and his lieutenant were blown from the vehicle, and med evacuated for treatment.

Years later, while stationed in Fort Riley, Kansas, he achieved the rank of Command Seargent Major with responsibility for the entire infantry division.

After retiring with 30 years of service, Warnick enrolled in the University of San Antonio, where, surrounded by “a bunch of teeny boppers,” he earned a bachelor of arts degree in history.

His service decorations include:

Warnick, who celebrated his 95th birthday this month, resides on a small ranch near Opp with his nephew, Patrick Warnick, and his wife, Jennifer. He enjoys watching the chickens, horses and donkey frolic around the ranch. He also enjoys long rides on the golf cart, where he takes in the views of the countryside while drinking a cold beer.

Dream Flights also collects, preserves, and shares the stories of how participants survived through times of great strife to remind Americans of their shared humanity, their connection to each other and the value of listening. For additional information, or to request a flight, visit their website at dreamflights.org.