Remember When: A road of romance in state history

An interesting article by Rebecca Phillips appeared in The Birmingham News on January 15, 1939. “Montgomery, Ala. – To the lover of Alabama’s early history, there is ‘magic’ in the very words, ‘Three Notch Road.’ It conjures up vision of horse-drawn vehicles and intriguing personalities who were the early travelers over this road and stage coach stands where they tarried for a night’s rest.”

Not too long ago, a unique artifact was donated to the Three Notch Museum on Historic Central Street in Andalusia. The man who brought it in stated that this piece of wood had been in his garage for many years. He stood it up in a pot and secured it for the upright position to be on display before he brought it in – a genuine and authentic Three Notch marker. 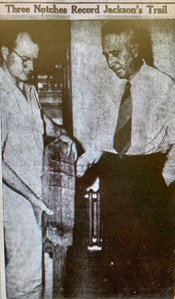 Just the other day, I ran across a newspaper picture from The Andalusia Star News, May 9, 1957 edition, of two gentlemen holding what was described as “an ancient three-notched lightwood post believed to have been a marker on the old Three Notch Road.”

Professor Auxford Sartain, head of the history department at Troy State Teachers College was one of these men who was peering at and examining the post. To my amazement, it looks just like the post we now have on display at the museum.

The late Lee Harris, Andalusia native and history professor at Troy University, once stated in a program to the historical society that the “three notches” made in the trees were more often “three gashes.” Some society members jokingly said, “Well, our streets could have been “East and South Three Gash Street!”

Phillips’ 1939 column in The Birmingham News, “Three Notches Cut on Trees for Route,” appeared to have contained some factual historical information from her research.

“It was in the Spring of 1824 that a young United States officer, Capt. Daniel Burch, was commissioned to make a road that would admit with facility the movements of carriages, carts, wagons, and military supplies between the two points of Pensacola and Fort Mitchell. The War Department had adopted a method of marking these routes by the use of three notches on the trees along the roadway.”

“There are very few of these triple markings left in Alabama today. Lee Levings who lives in the northwest corner of Coffee County where the Three Notch Road once crossed what is now the intersection of Coffee and Crenshaw County entering the present boundaries of Pike, remembers as a boy an unusually large oak tree with the three notches and close behind this oak a young pine sapling, also thus marked. His grandfather told him Capt. Burch’s soldiers had cut those notches when the road was laid out.”

“The oak had long since fallen, a mighty monarch laid in the dust. The young pine sapling, grown to huge dimensions, was felled a few years ago, but the notches on the stump of this pine are still visible, a mute reminder of the famous old Three Notch Road.”

“This stump is located about four miles north of the ancient post office known as Old Bullock, and one mile south of the old Elizabeth post office site in Coffee County.”

“Entering Troy, if you drive down Three Notch Street, you are traveling over a part of old Three Notch Road that Capt. Burch and his men laid out. It is well that the county seat of Pike has thus preserved this bit of authentic pioneer saga.”

“Once in Bullock County, and still treking over the course of the famous lane of communication, you will come to a settlement with the name Three Notch.”

In The Andalusia Star News, May 9, 1957 edition, columnist Renwick C. Kennedy of Troy wrote, “Troy Teachers’ College Displays Jackson’s Stake with Three Notches – An ancient lightwood stake with three clearly marked notches upon it, apparently a marker upon Andrew Jackson’s Three Notch Road across Southeast Alabama, has recently been exhibited at Troy State Teachers’ College. Don Whigham, a senior from Samson, who is a history major and who will graduate in June, found the notched post while on a deer hunt about ten miles north of Florala in the Conecuh National Forest.”

“Whigham presented the post to Professor Sartain who believes that the post is an original marker. According to Sartain and Whigham, the U. S. War Department opened up a trail known as Road No. 6 from Fort Mitchell to Pensacola in 1824, as a military emergency measure in connection with Indian wars and as a necessary route to the Gulf Coast. The length of the road from Fort Mitchell to Pensacola was 233 miles. Fort Mitchell was located on the Chattahoochee River in the present Russell County, a few miles below the present city of Columbus, Georgia.”

“It seems that Jackson actually had very little to do with making the road although it has ever since his day been popularly known as Andy Jackson’s Three Notch Road. “

“Dr. Peter Brannon, director of the Alabama Department of Archives and History (in 1957) says that the road was commenced in June 1824 and completed in August. Construction seems to have been largely a matter of following high ridges, building a few bridges, and marking trees with notches made with an ax. Perhaps existing Indian trails were followed.”

“One of the stories about the Three Notch Road is that the stakes were put one and a quarter miles apart to make the soldiers march further in a day’s time than they thought they were marching.” 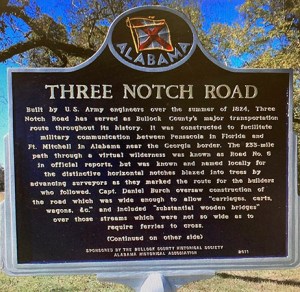 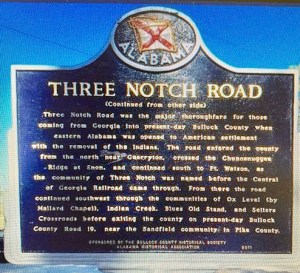 “Whigham found the three-notched stake or post in the midst of a pine woods with trees all around it. He said that an old road bed through the forest with trees now growing in it was close at hand. Whigham’s brother, a surveying engineer from Opp, says he had seen one other post like this one and believes that both were placed by Jackson’s engineers in 1824. The three notches were obviously cut by the old-fashioned square-bit ax rather than by the later rounded ax.”

“Sartain and Whigham believe one conclusive bit of evidence that the post was placed by Jackson’s engineers is the fact that there is no surveyor’s inscription upon it. Government survey teams usually stamped or carved an inscription upon their markers. Army engineers of that time did not.”

“While there is some disagreement among historians about the exact route of the old Three Notch Road, most of them agree that it passed through the present towns of Troy, Andalusia (known as Montezuma at the time), and Brewton. Several main streets in Andalusia and Troy are named Three Notch Street today.”

Lee Harris, wrote about the trail in The Historical News. He researched Alabama history in the Alabama and Florida Archives. Harris wrote – “On February 19, 1821, the Senate ratified the Adams-Onis Treaty transferring Florida from Spain to the United States. Well-marked routes became necessary to link the United States with its newly acquired territory.”

“In May 1823 Quartermaster General Thomas S. Jesup ordered Assistant Quartermaster Captain Daniel E. Burch of the 4th Infantry Regiment stationed in Pensacola to open a route into the interior of Alabama. Its purpose was ‘to sustain that post in the event of war. Communication to the rear will be necessary.’ The trail would serve many purposes, but it was initially and mainly a military road.”

“On June 6, 1824 after two routes were proposed, Capt. Burch, a lieutenant, a sergeant, two corporals, twenty-four enlisted men, all with three mules and three wagons began their task. The estimated route at 180 miles turned into over 220 miles. Bridges were built across Burnt Corn and Murder Creek.”

“The soldiers proceeded through a vast primeval forest consisting of trees of enormous size. The forest formed a canopy which blocked out the sunlight leaving the forest floor almost bare. Under those conditions, it was quite easy to see 300 yards. The soldiers cut three large horizontal gashes in the trees at intervals of some 200 yards. The gashes were at least three feet long, a foot high, and a foot deep. All a traveler had to do was to follow the ‘notches’ or ‘chops’ as they were called. Eventually a path would be worn and wagon ruts would appear. From that point on, you had the 19th century version of a road.”

“Of the 29 men who marked the road, only one was lost as the result of an unfortunate encounter with a rattle snake. The work proceeded swiftly since a trail had been marked in 1817 from Pensacola to Fort Crawford-Fort Gaines. In mid-August, the trail entered the Federal Road, and the task was complete.”

“Today,” Harris states, “the old trail exists in the form of federal, state, and county roads. The southern most part of the road is present day Highway 29 entering Andalusia from East Brewton and the Carolina area on South Three Notch Street turning onto Snowden Drive. It travels west for a short distance on Highway 55 before turning on Fletcher Road. From there, it moves east on the River Falls to Heath Road then over to County Road 70 and 43 past Rose Hill passing through Bullock Community and on over to Troy.”

“The original purpose of the trail has passed into history but is still in use along its entire length.”

Lastly, Harris sums up the history of the trail with this note: “It is a myth that Andrew Jackson was involved with the building of the Three Notch Trail. In the summer of 1824, Jackson was a U. S. Senator from Tennessee and was preparing to run for President of the United States.”

Sue Bass Wilson, AHS Class of 1965, is a real estate broker and long-time member of the Covington Historical Society. She can be reached at suebwilson47@gmail.com.