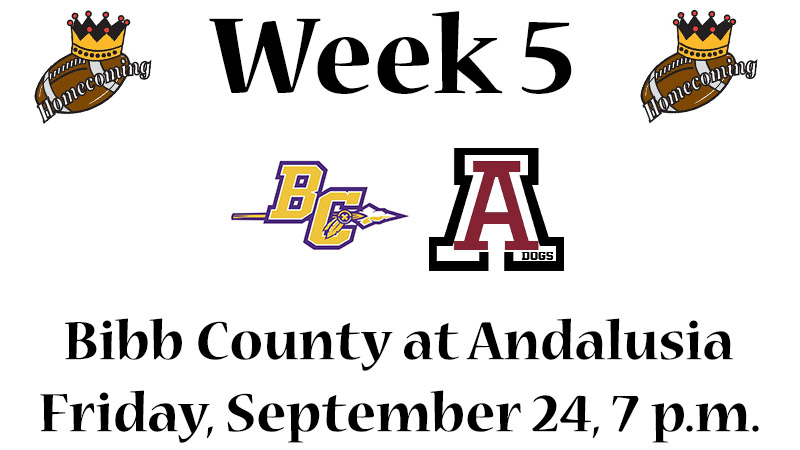 The Bulldogs had a big offensive game against Charles Henderson, 58-28. The Choctaws suffered their first loss at American Christian, 34-12.

Head Coach Trent Taylor said he felt Andalusia still has a long way to go. “I don’t think we played really hard on one side of the ball and gave up too much. On the other side, we made some mistakes. I think at times we did some good things, but the biggest for us right now is consistency. We have to take advantage of putting people away. I don’t think we did that, and that kind of effort is not going to get us where we want to be.”

He stated the Bulldogs used last year’s game as a stepping-stone for the remainder of the season.

Taylor said, “We viewed it as a playoff-type atmosphere with the distance and responded really well to that. This year, the shoe is on the other foot. Bibb County is without a doubt the biggest football team we’ve played to date. They are huge up front offensively and defensively. When you look at them on film, they look like they are playing better. They were undefeated but had a disappointing loss last week. I think all the motivation is in their court to get things turned around.”

Taylor added homecoming week does bring distractions. “Nobody does a high school homecoming like Andalusia does. I think it is imperative our guys focus on what is important and their job, which is to win the game or homecoming is not a success. Our guys are well aware of what Bibb County brings, and we have to play,” he said.

This contest marks the fourth all-time meeting dating back to 2000. BCHS holds a 2-1 lead in the series, but AHS has a 78-55 scoring edge.

Covington County native Matt Geohagan leads the Choctaws in his seventh year with a career record of 60-19.

Andalusia picked up a 31-0 win at Bibb County in 2020. The Bulldogs had 447 yards on offense including 310 rushing yards while the defense allowed only 93 yards.