Local veteran gets opportunity of lifetime on Dream Flight 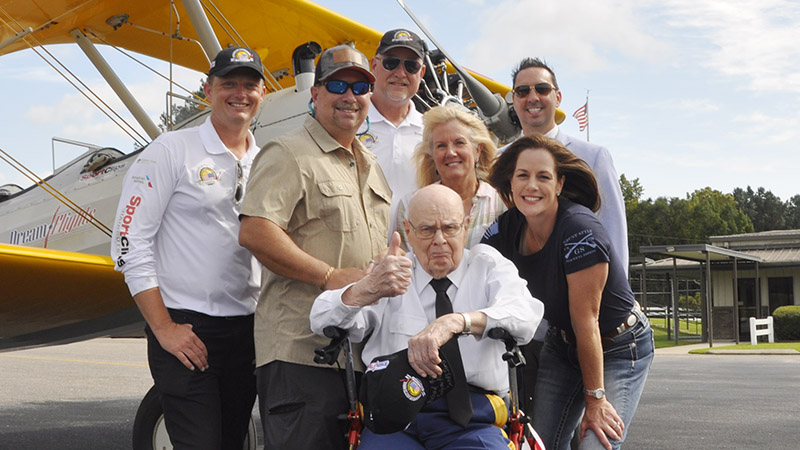 Warnick was honored by the Dream Flights organization to take the flight. Dream Flights is a national organization dedicated to honoring military veterans and seniors with the adventure of a lifetime: a flight in a Boeing Stearman biplane.

Warnick said he was familiar with the plane that was used for the flight. “I have flown in one of these biplanes once or twice before. When I was in the war, we mostly flew in choppers and helicopters.” 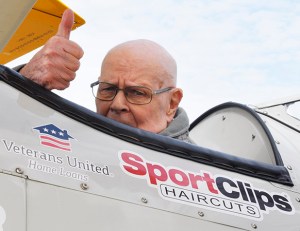 Warnick gives thumbs up as he prepares to take off on his memorable flight from the South Alabama Regional Airport on a Boeing Stearman biplane.

He joined the Navy when he was only 17 years old and served as a smoke boat operator during the Battle of Okinawa. He made it through WWII unharmed and was discharged upon the end of the war. After his discharge, he used the benefits he received to help pay for flight lessons and pursued a love of aviation. Unfortunately, the company laid him off, and he could no longer afford lessons.

Warnick eventually joined the Army and was stationed in Germany during the Korean War. While in Germany, he met Phyllis, a former Army drill sergeant, and the two were married.

He volunteered to help in the Vietnam War and was injured when he caught shrapnel in his leg. Warnick was treated in the Philippines and returned to Vietnam. He was injured a second time when a grenade left shrapnel embedded in the left side of his face. He and his lieutenant were medically evacuated for treatment after their vehicle was targeted with a land mine.

He achieved the rank of Command Sergeant Major while stationed in Fort Riley, Kansas.

After retiring with 30 years of service, Warnick earned a Bachelor of Arts degree in history from the University of San Antonio. He said, “I’m proud of all the guys I served with. That’s the big thing. I have a lot of good friends who have long since departed, and I’m the last of the big spenders.” 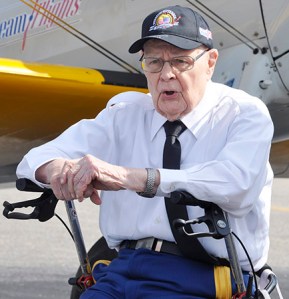 Warnick addresses the crowd after his flight.

Warnick celebrated his 95th birthday this month and resides on a small ranch near Opp in the Horn Hill community with his nephew, Patrick Warnick, and his wife, Jennifer.

American Theater Ribbon Dream Flights also collects, preserves, and shares the stories of how participants survived through times of great strife to remind Americans of their shared humanity, their connection to each other, and the value of listening.

Warnick was very grateful for the opportunity of taking the flight. “I like it and am glad. Anytime I get to fly, I really appreciate it. It’s good to get out and get around seeing this whole area from the air as opposed to the ground,” he said.

His service decorations include:

Editor’s Note: Portions of this story were contributed by the City of Andalusia and the South Alabama Regional Airport.