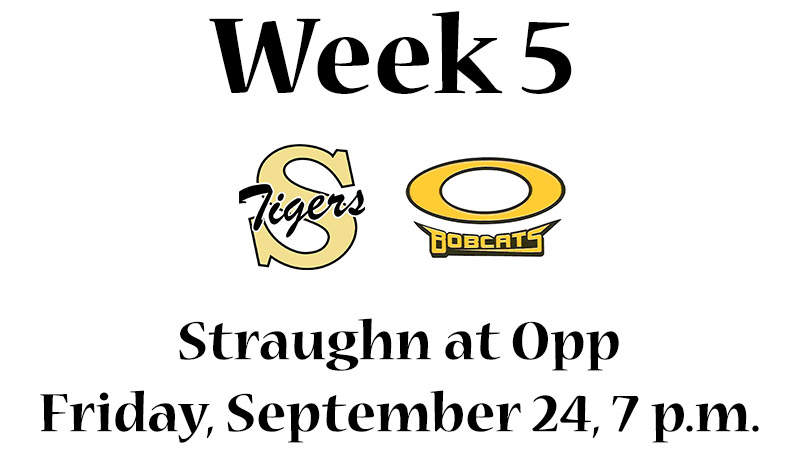 The Tigers enter the matchup after suffering a region setback in Montgomery at St. James last week, 43-6. The Bobcats went on cruise control with a Homecoming blowout win over Daleville, 55-0.

SHS Head Coach Ashley Kilcrease stated last week’s game was a tough one. “Coach (Jimmy) Perry and his staff have a great team at St. James. They were just better than us Friday night. We were disappointed in the outcome but will get better.”

Kilcrease added the Tigers would learn from the result. “Losing stings and we don’t like it, but it is a great teacher. We have to watch the film and see how we can get better from what we saw. I fully expect us to respond the right way,” he said.

OHS Head Coach Mike Dubose said the Bobcats played fair last week. “Daleville is a young team that is primarily 8th, 9th, and 10th graders. They’re doing a great job over there growing and improving but aren’t just quite ready yet. It gets to be messy when you play in that type of environment, but we got a win and got out of it healthy. We played well and didn’t have anybody banged up, so it was good to come out healthy.”

The two teams first met during the 2002 season. It will be the 18th meeting of the modern-day era as SHS holds an 11-6 lead and has outscored OHS 445-404. Straughn won 10 of the first 11 games in the series, but Opp has won five of six since with the lone loss coming in overtime.

“Opp has a very talented team and is very well-coached. We will need a great week of practice to get ready for Friday. They are explosive on offense and physical on defense,” Kilcrease said.

Dubose added Coach Kilcrease has done a great job this season at Straughn. He said, “I’ve known him and Coach David Lowery for a long time. They have a great staff and are doing an outstanding job. They have a good football team and are really big, strong, and physical. It’s a challenge for us and a big game for both teams.”

The Bobcats defeated the Tigers on the road last season, 41-20.