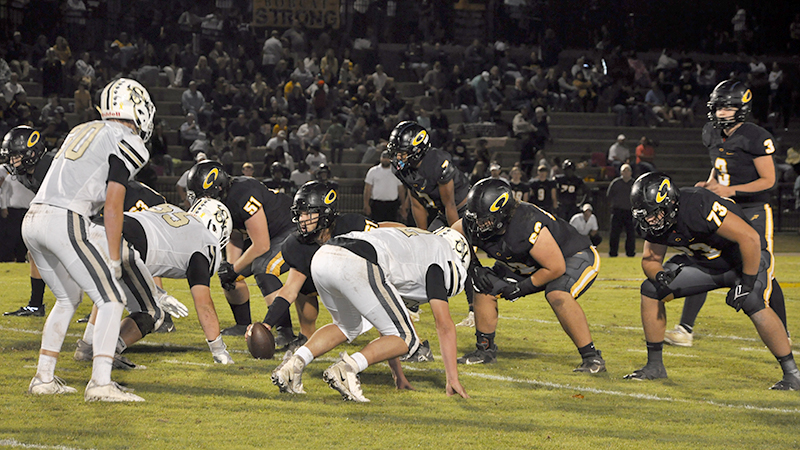 The Opp offense gets set to snap against the Straughn defense.

The Opp Bobcats used a strong effort on offense and defense to earn their largest margin of victory ever against the Straughn Tigers Friday night, 42-0.

SHS began its first drive of the game from the 27. Aaron Olhava quickly made a first down on an 18-yard run. OHS forced a punt but stalled on their drive and also had to punt. A.J. Coleman then intercepted a pass from Abram Guilford, and Opp (5-1) was first on the board. It took only two plays and 52 seconds as Gray Jennings threw a 42-yard touchdown pass to ZaZa Lindsey. Jackson Pierce added the PAT for a 7-0 lead.

The defense held Straughn (4-2) in check, and the offense went back to work. Terry Davis found an opening and raced 47 yards to the end zone to make the score 14-0 with 3:41 to go in the first quarter.

SHS took over and put together a long drive. Abram Guilford threw a 9-yard pass to Parker Black and a 26-yard strike to Jaylon Guilford to put the ball in OHS territory. Jaylon Guilford hauled in two more big first downs with receptions of 28 and 15 yards as the first quarter ended. The Tigers faced a fourth down just inside the 1, but the Bobcats stopped Abram Guilford on a quarterback sneak.

The momentum stayed on the home side when Davis rumbled 75 yards to the visiting 23. After a holding call, Jennings found Pierce open on a 22-yard touchdown pass to pad the lead to 21-0. On the next drive, Abram Guilford connected with Olhava for a 20-yard gain and first down. Penalties proved costly as Straughn turned the ball over on downs. Jennings threw a 17-yard pass to DaDa Stoudemire, and Lindsey hauled in a 60-yard touchdown reception to give Opp a 28-0 halftime lead.

Jennings used his feet on the opening play of the second half for a 13-yard gain. Following a pair of incomplete passes, he went to the air on a 21-yard pass to Jabarri Hill. Davis then ran 14 yards before a fumble gave the ball back to SHS. The OHS defense continued to shine when Tanner Hall intercepted a pass in the end zone for a 35-0 lead with 9:25 left in the third quarter. Abram Guilford connected with Black on a 31-yard pass to move the chains on Straughn’s next drive before another miscue. Opp earned four first downs on the next drive but was turned away after a missed field goal.

Abram Guilford sailed a 36-yard completion to Jaylon Guilford. The drive came to an abrupt halt on a fourth-down incompletion. Davis scampered 13 yards on the first play of the next drive for the Bobcats. Jennings kept up his strong passing with a 41-yard dart to Robbie Gafford to put the ball at the Tigers’ 8. Davis scored from a yard out on the final play of the third, and Pierce added his sixth PAT for a 42-0 lead.

Olhava began the fourth quarter with an 8-yard gain. Jaylon Guilford then earned a first down on a 5-yard pickup. Ryan Cobb got in on the ground game, but John Helms intercepted a pass from Layne Grantham. The Bobcats put their second string in the game and were plagued by holding penalties. T.J. Hall had a 3-yard sprint to begin the final drive as Cobb added an 11-yard gain and first down. The Tigers were stopped as the final horn sounded.

Jennings was 11-of-15 passing and 265 yards with three touchdowns. Davis tallied 12 carries for 162 yards and two touchdowns. Lindsey caught two receptions for 102 yards and a pair of touchdowns. Cole Jennings paced the Opp defense with 12 tackles and was followed by Hayden Norris who had 9. Wyatt Horn and Patrick Kohler each added 7 tackles.