Browsing through the old newspapers, I ran across this front page article headline in The Andalusia Star, November 20, 1941 edition. This should be easy to remember down the road for it was a game that was played right before the attack at Pearl Harbor on December 7, 1941.

“ANDALUSIA HIGH SCHOOL NEWS – STOP OPP – Andalusia High School will have its first homecoming on Wednesday and Thursday, November 19 and 20 (1941). This (AHS) Homecoming is sponsored by the Senior Class and the Student Council and will feature a bonfire, a parade, football game, dance, and other events.” 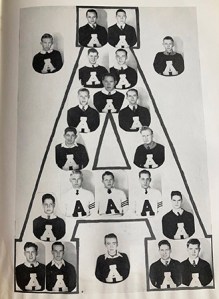 “The bonfire will be in the form of a general ‘pep rally’ to be on Wednesday night back of the high school. The Band will be present and the Cheerleaders will lead festivities.”

“The Junior Class is sponsoring a parade to leave the high school at 10 o’clock Thanksgiving morning. It will include various floats, banners, decorated cars, and general spirit.”

“’Stop Opp’ is the slogan for the entire event. It was selected by a committee of Seniors from a large number of slogans which were entered in the contest sponsored by the Senior Class. It is credited to Dewey Moore. Tupie Berman handed in one (mentionable) slogan which took second honors: ‘Bobcats Defeat is Bulldog’s Meat.’”

“On Thanksgiving afternoon, the Andalusia Bulldogs will meet the Opp Bobcats, their traditional rivals, on the local field for the last game of the season. Sponsors chosen by the ‘A’ Club are: Ruth Barnes, Elmyra Merrill, and Peggy Riley. The Andalusia Band will put on a very unique performance at the half. At the climax of the celebration, there will be a dance at the Andalusia Country Club Thursday night.”

“The Senior I Sophomore Class is trying to raise enough money to buy a megaphone for the Cheerleaders at the Opp game.”

“Both of these elevens have lost games this season, but boast strong teams and are fairly evenly matched so the fans are assured of a good football game.”

“Business men of Andalusia are giving the Bulldogs a banquet at the High School gym Friday night at 7:30. The most valuable player on the squad will be named and presented a beautiful trophy that was donated to the Athletic Association by the J. J. Moates Auto Co.”

December 4, 1941 – “The men of Andalusia were hosts to the AHS football squad last Friday evening at a banquet given at the High School building. A delightful dinner was served consisting of turkey and ‘all the trimmings.’ Mr. C. L. Martin acted as toastmaster. He spoke of the success of the season pointing with pride to the hard schedule and the number of games won.”

“Brief reminiscent talks were made by Mr. Tracey Wilder and former coaches James Thompson and Guy Carmichael as well as Jake Moates and the awarding of the beautiful trophy by Mr. L. E. Brown. It carries a plaque on which is to be inscribed the name of each season’s Most Valuable Player.”

“Tying for this honor by a ballot of the entire squad were Frank Horton and Ray Shears. These two were selected on their merits of leadership, sportsmanship as well as their ability as outstanding players. Both boys’ names will be placed at the top of the plaque.”

“Coach Beaird awarded letters and spoke of the team’s full cooperation and a summary of the closing football season. Mr. Beaird was presented a radio in appreciation of his efforts as coach of the Andalusia team.”

Let this writer make a few comments. I am glad the tradition of playing a Homecoming football game on Thanksgiving afternoon was not followed. Games back then were played during the afternoon on the athletic field since there was no stadium and no lights. Also, a parade on Thanksgiving morning? Who would have attended when most folks and business people are not downtown and most are cooking and celebrating with family?

I found it rather odd that there was no mention in the next week’s newspapers, The Andalusia Star or The Opp Weekly News, as to who won the game. Was there ever a bonfire pep rally or a parade because of rain? Was there a Homecoming dance? Probably so but don’t know!

Most Homecoming dances through the years have been held at the school gym, but this year the dance will be held at the Andalusia Country Club just like it probably was 80 years ago.

We don’t know exactly when the yard rolling started but it did. Do any of you readers know? Lots of festivities have been added and held during each Homecoming week, and this year is no exception. The popular school Homecoming assembly with skits honoring classes always held in the auditorium has been moved to the stadium. There is bound to be a football banquet at the end of the season, but I bet it won’t be right after the Homecoming game, and I bet the menu will be steak instead of turkey and the trimmings!