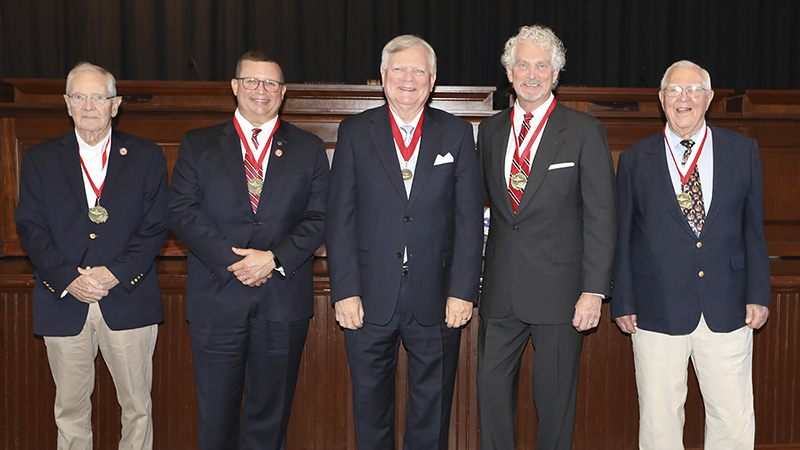 Albritton is a physician and educator who retired as the dean of the College of Medicine at the University of Saskatchewan. He also worked with the U.S. Public Health Service at the Centers for Disease Control in Atlanta. Among his recognitions was the J. Burt Annin Award from the Child Welfare League of America. He is a 1960 graduate of Andalusia High School.

Johnson is a partner in Newport LLC and consults a number of industries on supply chain, revenue growth, and succession planning. He also is an avid outdoorsman, a part owner of Wild Bearings, and the author of “Fly Fishing the Blue Ridge Parkway.” Johnson lettered in football for four years while earning a business administration degree from the University of Southern Mississippi. He is a 1972 graduate of Andalusia High School.

Allen Jones retired from Auburn University as a professor of history and archivist. He established the archivist program at AU, and trained a generation of archivists, one of whom curated three presidential libraries. Dr. Jones also earned the rank of colonel in the U.S. Army Reserves. He played a leading role in developing the Alabama Department of Archives and History and in preserving state records. He is a 1948 graduate of Andalusia High School and a founding member of the AHS Scholarship Foundation.

Mike Jones Jr. is an attorney and municipal judge. He also represents Covington County in the Alabama House of Representatives, where he also chairs the powerful Rules Committee. He serves as deacon and trustee of First Baptist Church of Andalusia, and has been active as a youth league coach, and served on the LBW Foundation Board and chaired the Andalusia Downtown Redevelopment Authority. He is a 1985 graduate of Andalusia High School.

Col. Claude Burnett also was selected for recognition. Dr. Burnett currently is deputy commander of the Landstuhl Regional Medical Center in Landstuhl, Germany. He planned to be in attendance, but his base currently is housing thousands of Afghan refugees and providing health care for refugees at other bases in Germany. His award will be presented next year.

Nominations are accepted each year, and awards are made by members of the Outstanding Graduate Committee, currently chaired by Andalusia Mayor Earl V. Johnson (Class of 1965). For additional information, contact Michele Gerlach at 334-428-1143.