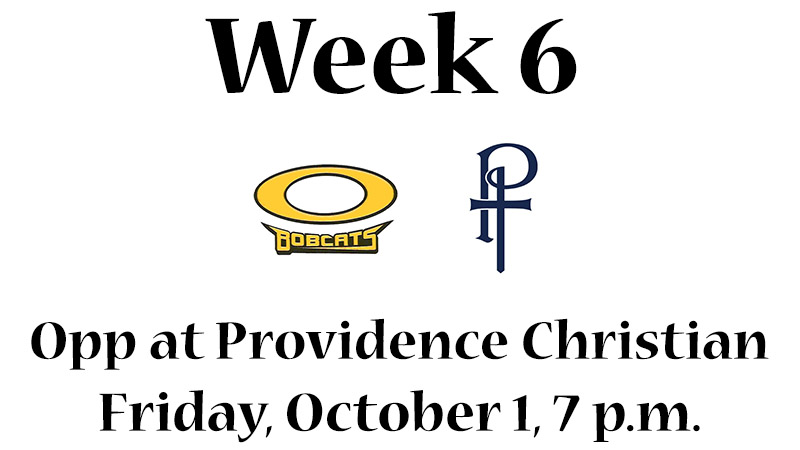 The Bobcats earned bragging rights last week in a 42-0 win over Straughn. The Eagles battled Elba at home but came up short, 27-6.

Head Coach Mike Dubose stated it was a big win last week. He said, “Straughn is rebuilding right now, and they’re young but have a really good football team. The final score is not indicative of how close the game was. They ran the football up and down the field on us but just didn’t get it in the end zone. We made big plays and didn’t sustain an awful lot of drives. I would love to see us a little bit more focused.”

He added Ashley (Kilcrease) and David (Lowery) had a really good game plan. “It was a good game between two cross-county rivals, and we came out of it in relatively good shape.”

Opp will clinch a playoff spot with a win at PCS.

Dubose said, “We’re a spread team and they get in the two tight end wing type with a lot of running plays and misdirection type things. It’s a little bit of an unusual offense for us to face. Defensively, they’re going to line up in the four down front and come at you to play physical. They have a good team, and playing them over there will be a challenge for us. You have to be able to go on the road and win if you want to win championships.”

The two region opponents lock horns for the sixth straight year after first meeting in 2016. OHS holds a 3-2 lead over PCS and has outscored its region counterpart, 128-115.

Kenny Keith is in his 10th year with Providence Christian and has a 61-41 career record.

The Bobcats dispatched the Eagles at home last year, 34-12.