Looking back to the late summer of 1957, motorists riding down East Three Notch Street would have eyed the new steel frame skeleton of the new First Baptist Church of Andalusia building. For over half a century, the church that was established originally in the 1800s as the First Missionary Baptist Church was located on Crescent Street behind the Covington County Courthouse. A parking lot today marks the site of the old church. Another wooden church once stood in its place as some historians record.

The Baraca Hall was once part of the church complex. It has a Mission Revival facade and stands close to the original and oldest graves in Magnolia Cemetery. The word Baraca is from the Hebrew word in the Bible (Chronicles), Berachah, meaning “blessing.” The Baraca Hall was a blessing for many years for Sunday School classes and many banquets for young and old alike. Civic clubs made use of this hall for dinners prior to the Scherf Memorial Building honoring special guests to town such as Governor Frank Dixon who made a speech to various civic leaders of Andalusia in 1939, the year the hall was built. The brick structure now owned by the county and once occupied by the American Red Cross is boarded up while it is decided what the future of the building might be. One cannot deny that its architecture adds character to our downtown. 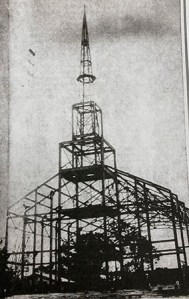 The frame of the First Baptist Church as it appeared in 1957.

An FBC men’s Sunday School Class, the Baraca Class, once posed for annual panoramic photographs taken on the steps of the courthouse. Several of these pictures are hung and displayed at the Three Notch Museum and in the FBC Chapel.

One former FBC pastor, Dr. L. E. Barton, wrote, “One opinion is that C. A. (Gus) Stanley gave the land for the Baptist church and the cemetery, but another citizen remembers that Stanley was the county commissioner and secured the land as a gift from the county.”

The Baptists like the Methodists customarily had the pall bearers at funerals walk the caskets over to Magnolia Cemetery. This was before the days of motorized hearses and maybe even before undertakers had horse-drawn hearses. After all, the Methodists were only a couple of blocks away from the cemetery on Church Street, Yes, Church Street really did get its name from a couple of churches located on the street. Another church was a Church of Christ.

“Twinkle” and (Editor) Ed Dannelly wrote in their history of the Methodist Church – “The initial First Methodist parsonage was located on a plot that was about where the former Commercial Bank and present Regions Bank now stands. The house was used as City Hall during an early J. G. Scherf mayoral administration.”

Entrance arches seen in historic cemeteries across America and even in “cowboy” movies were pretty common in the old days. The large iron archway that once graced Magnolia Cemetery, crude in design, can be seen at the Three Notch Museum.

We must be mindful of the words of an unknown author, “A cemetery is a history of people, a perpetual record of yesterday and sanctuary of peace and quiet today. A cemetery exists because every life is worth loving and remembering always.” Many of the town’s early leaders, business persons, founding families, and colorful and contributing citizens are laid to rest in Magnolia.

The August 22, 1957 edition of The Andalusia Star reported that the new sanctuary would seat 800 with a balcony to be added at a future date providing 200 additional seats. The spire would reach 130 feet skyward from the ground level. Special chairs (and a loft) will be provided for a 52-member choir. C. W. Williams of Marion, Alabama was the contractor. Workmen were dismantling shipments of limestone that would be used on columns of the building. The new structure was to cost a total of $255,000., the largest and most costly church ever erected in South Central Alabama (in 1957).

The church was eventually completed as well as a chapel and fellowship hall with Sunday School rooms, offices, and a library. I Remember When the parking lot got paved, because my neighborhood friends and I rode our bicycles around the tar and gravel drive soon after. I slid down and fell off my bicycle and still have a piece of gravel in my knee to this day!

Chad Martin, husband of Ann Martin, an FBC pianist and choir member for many years, took the photograph of this steel frame skeleton. What a surprise to come across this photograph in an old newspaper. Many of you readers may have not ever seen this picture.

For the next over 50 years, lives of young people would be molded and formed on a firm Christian foundation just like steel that framed the church building. I was reminded of that when so many AHS alumni that live out of town showed up for homecoming. I recognized so many of them as being former young people who grew up in the new main street church in the 1960s and 1970s, the classes of 1972 and 1982.

“I was glad when they said unto me, let us go into the house of the Lord.” May this church be blessed and continue to mold and frame lives for many years to come.

Writing comes naturally for this left-hander