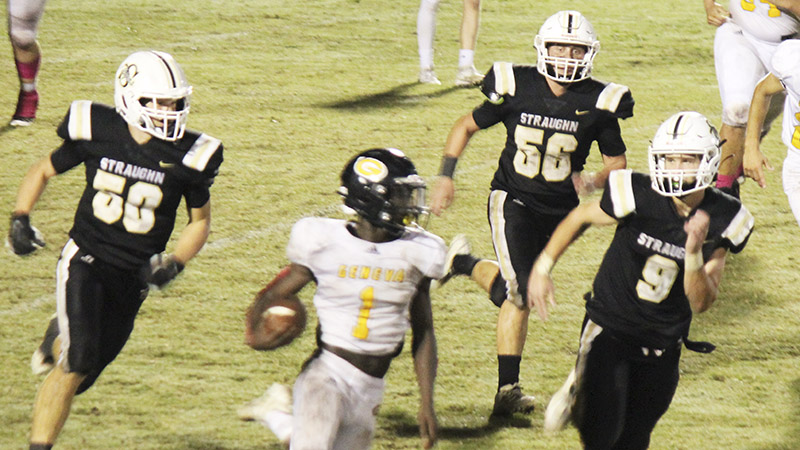 In a hard-fought game from both sides, Geneva held on for a 34-21 road region win at Straughn Friday night.

The Panthers (5-2, 3-1 4A Region 2) began the game with good field position at the 43. The Tigers (4-3, 2-2) forced fourth down before an offside penalty. Timothy McReynolds kept the drive alive with a 2-yard gain. Logan Adams capped the opening series with a 24-yard touchdown pass to McReynolds as GHS took a 7-0 lead. SHS responded right back and needed only five plays to tie the game at 7-7. Aaron Olhava had a huge 35-yard first down dash as Jaylon Guilford moved the chains on a 6-yard sprint. Hayden Bozeman found the end zone from 18 yards out, and the PAT was good.

The Tigers quickly forced a three and out and allowed the offense to start their next drive in positive territory. Abram Guilford threw a 16-yard pass to Parker Black on the final play of the first quarter. Olhava then blitzed up the middle for a 16-yard touchdown and gave Straughn a 14-7 lead early in the second. Brenden Bartholomew pinned Geneva back with a booming kickoff to the 9-yard line. That did not faze the Panthers who drew even on 10 rushing plays. Kingston Tolbert closed the five-minute drive with a 23-yard touchdown, and the point after took the score to 14-14 with 5:30 left in the half.

Both teams traded punts as SHS set up shop at the visiting 29 following a shanked punt. After a costly holding call, GHS intercepted the ball and had a lengthy return. McReynolds put Geneva in front 21-14 with a 1-yard run. Straughn made one last threat before halftime as Nicholas Williams had a 10-yard first-down run. Jaylon Guilford scampered for 13 yards as Abram Guilford tacked on 12 on the final play of the half.

The Panthers stood firm on defense to force a punt and took over deep in their own territory. Micah Turner had other ideas and intercepted the ball. On fourth and 10, the Tigers rolled the dice, and it paid off as Turner caught an 11-yard reception. Five plays later, Abram Guilford threw an 8-yard strike to Black and moved the chains to the 2. Olhava called his own number as Straughn forced a 21-21 tie after three quarters. McReynolds crossed the goal line from 4 yards out, and Geneva retook the lead, 28-21, 30 seconds into the fourth. The offenses stalled until halfway through the final stanza.

GHS started its final drive at the 22 and extended its lead to 34-21 with a 34-yard run from McReynolds. Abram Guilford found Turner on a 20-yard pass for SHS, but an interception at the goal line ended the threat and ultimately the game after the visitors took a knee.

Straughn holds Homecoming next Friday in another pivotal region game against B.T. Washington (2-4, 1-3).

Author’s Note: Jennifer Brooks contributed the photo for this story.