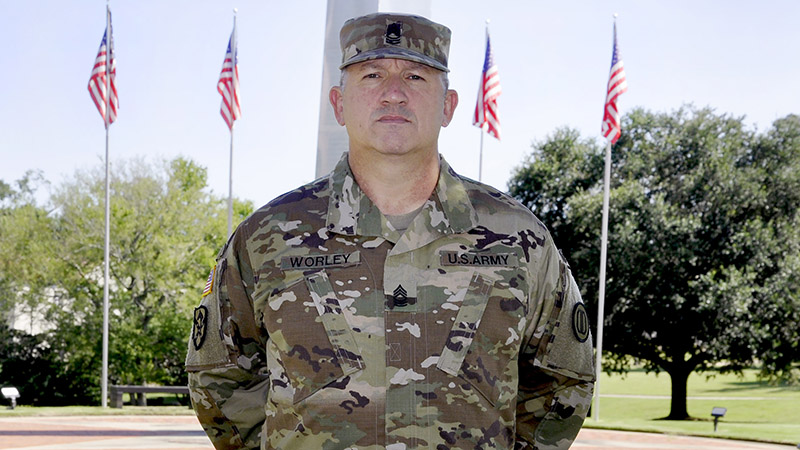 As a member of the United States Army for 34 years, Tim Worley has worked hard to achieve his lifelong goal of being named master sergeant.

Andalusia resident Tim Worley is proud to be a member of the United States Army, but he is even prouder after his promotion to the rank of Master Sergeant.

Worley has been in the Alabama Army National Guard for the past 34 years. “I joined on Feb. 12, 1987, along with six friends from Straughn High School and three friends from Andalusia High School. There were 10 of us in the same Basic Training Company, and seven of us were in the same platoon,” he said.

His loved ones were his biggest influence for joining the military. “My whole family were members of the Armed Forces in some branch of service from the Navy, Army, and Air Force. The main reason I joined was because my brother Tommy Averill joined our local Guard Unit, and I’ve always looked up to him and just wanted to follow in his footsteps.”

This new rank means a lot to Worley. He said, “My promotion to Master Sergeant (E8) has always been a goal of mine ever since I witnessed my NCOIC Thad Straughn Sr. in Fire Direction Control (FDC) receive his promotion to E8. I will never forget when I was just a Private First Class (PFC), and after we got back to the FDC section room, he gave all of us young soldiers a speech. He said one of these days, if you work hard and put in the time you will make it to Master Sergeant.”

His promotion takes him to Northport, Alabama, where he will serve as the Senior Culinary Management NCO for the 31st chemical brigade. He will work in the S4 section and oversee the operation of two Battalions and four Companies.

His family has played a huge role throughout his service in the United States Army. Worley said, “The support of my family has been tremendous. I have been married for the past 19 years to a wonderful woman. We have four awesome daughters, four grandkids with one on the way, and one of the best son-in-laws you can ask for. I couldn’t have accomplished anything in the military if it hadn’t been for my family especially my wife.”

He showed his appreciation for his wife and everything she does. “Every weekend I drill, every school I attend, and every deployment I have been on, she has taken care of everything on the home front. I have never heard her complain not one time. I might be the Master Sergeant in the military, but she is the Master Sergeant at home.”

Worley feels it is imperative to fight for our nation given its current state. “All you have to do is look at the shape the country is in now, and it’s only getting worse. We as Americans must fight to keep this country just as the drafters of our great Constitution intended,” he said. “Just read the Constitution and look where we are as a country now. That’s why it’s important to fight for our country.”

He thanked his wife Amanda for this opportunity and discussed what set the U.S. Army apart from other branches of the military. “The biggest thing I can think of is the number of members versus the other branches. The Army has almost 480,000 troops more than any other branch. Regardless of the different branches, we all fight together as the Armed Forces, which is the biggest and best Armed Forces in the world.”

He offered some great advice to anyone looking to join the military. Worley said, “I would tell them to study for the ASVAB (Armed Services Vocational Aptitude Battery). This test will determine what MOS (Military Occupational Specialty) you qualify for no matter what branch of service you decide to join. The better score, the more choices you will have when deciding what MOS you would like to perform in the military. No matter what MOS the recruiters try and get you to pick, you pick the one that you think will best benefit you. If you do decide to join the military, make sure you complete 20 years of credible service.”

Worley has been to over 15 military schools, which have taken him to six different states. In addition, he has been to school in the Virgin Islands and has four MOS’s, while making three deployments. “I was involved in Operation Iraqi Freedom (IRAQ), Operation Warrior Trainer at Camp Shelby, Mississippi, and the Southwest Border Mission in Del Rio, Texas and Eagle Pass, Texas,” he said.

He is currently on ADOS orders in Montgomery at JFHQ working with the Soldier and Family Support Division serving as the Yellow Ribbon Coordinator for the State of Alabama. Worley said he has six years and 11 months before he can retire. “I am in the process of starting DLC 5, so I can get enrolled in the Sergeant Major Academy. Just maybe I will make it to the rank of E9 Sergeant Major.”

Worley is a graduate of the Straughn High School Class of 1988 and resides in the Harmony community with his wife Amanda. He has four daughters: Shawna, Whitney, Destinee, Alyssa, and four grandchildren: Camden, Harper, Noah, and Mixon. “No matter what situation arises, it will always be God and Country,” he said.