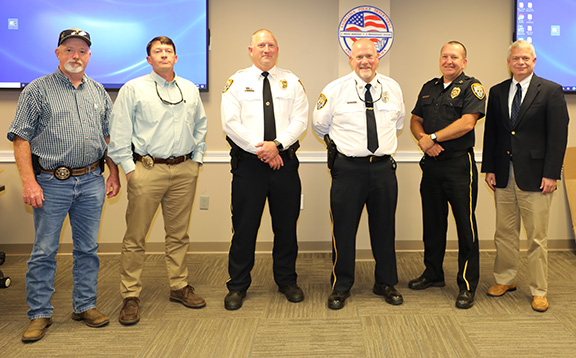 In some ways, Jamey Wismer and Brett Holmes have been playing “follow the leader” for most of their adult lives.

Wismer began his law enforcement career as a Covington County jailer, back when the jail was located behind the courthouse. He moved to Troy to complete his degree at Troy University, and went to work for the Troy Police Department.

Likewise, Holmes began his career as a jailer, but at the newer jail, located behind the county administration building.

“We didn’t really know what we were doing,” Wismer recalled recently of the early DTF days. “We winged it until we could figure it out.”

Among Wismer’s co-workers then was a co-worker now, Paul Dean. Both are captains at the Andalusia Police Department.

“We were getting multiple meth labs every day,” Dean recalled. “It was really a job where you were on call 24 hours a day.”

They didn’t realize the inherent danger in being exposed to meth labs until Dean went to a special school.

“We didn’t know what we didn’t know,” Dean said, adding that the men had been exposing themselves to potentially lethal chemicals daily.

In the beginning, the DTF members were assigned to work drug cases, but were often called to the scenes of violent crimes. The first team members included Mark Odom, who now directs the DTF. Ben Bowden – who is now a circuit judge – prosecuted their cases.

All of their cases were memorable, Wismer said.

“One that was significant was finding more than 1,000 pounds of meth oil,” he said. “That was pretty big for our county in task force days.”

But all of the cases were significant, he said.

“We were hitting three and four labs a night, chasing our tails and working meth,” he recalled.

It was at about that time that Brett Holmes moved from the county jail to become a deputy sheriff. For a young officer, it appeared that the DTF members were having the most fun.

Wismer and Dean recalled investigations when they were stuck at the scene for hours. Holmes – whether on or off duty – would show up with a bag of hamburgers.

Paul Hudson – who currently serves as chief of the Andalusia Police Department – also joined the DTF.

“We had a great time doing what we were doing,” Wismer said. “We had a lot of laughs, but we got a lot of work done. Those are the fond times to look back on.”

One morning, Wismer answered the phone and responded to then-District Attorney Eugenia Loggins’ request that he come by her office. When he returned, his co-workers were preparing to serve a warrant for the Customs Service.

Paul Dean explained it this way: When the Drug Enforcement Agency (DEA) calls you, you’re dealing with a national case. When you work with the Customs Service, it’s international and it’s going to be big.

Still, the young officers weren’t quite prepared for what happened. The suspect did not come to the door, but he did shoot. The officers took what little cover they could find. Wismer was hiding as much of himself as he could behind a rock.

It was in the midst of that drama that he decided to break the news, his co-workers recalled. From his position behind the rock, he announced, “I’ve been offered a new job, and I believe I’m going to take it.”

The new job was as an investigator for the district attorney’s office. From their own partially-hidden positions, his co-workers and friends asked him why.

“Because you never hear of Gary Wayne being shot at,” he quipped, referring to Gary Wayne Hutcheson, then an investigator for the DA’s office.

Meanwhile, Holmes had become a Covington County deputy who thought the DTF agents were having all of the fun. He’d often appear at scenes they couldn’t leave with a bag of hamburgers. Not long after Wismer moved to the DA’s office, in 2003, Holmes was hired by the Opp Police Department and assigned to the Drug Task Force.

Five years later, a familiar thing happened. Wismer moved to Pardons and Paroles, and Holmes was hired as an investigator for the District Attorney’s office.

“We brought him in to oversee investigations and to help it run more smoothly,” Chief Hudson said.

Now, after 27 years in law enforcement, Wismer is retiring to be administrator and director of senior adults at his church, Westview Baptist in Opp. And, as in the past, Holmes has moved from the DA’s office to the APD, where he is now “Capt. Holmes,” in charge of investigations.

Chief Hudson said, “I know Brett, and as everybody knows, we are brothers-in-law. He has the experience and knowledge to come in, take that position, and build on what Jamey has done.”

If the old friends joke that “Brett is always the clean-up guy for Jamey,” it’s all in good fun.

Wismer said he can remember his impressions of Holmes as a young officer.

“I remember thinking, ‘That dude is gonna be great.’ He’s relentless when he gets it in his mind to solve a case. You don’t see that in guys every day.”

While he’s leaving law enforcement, Wismer said he believes he’ll continue to serve the community in his new role.

“I’ll still be serving folks, but hopefully it’s folks who will be smiling when they see you coming,” he said.

And he feels good about leaving again leaving a job in Holmes’ hands.

Meanwhile, Holmes said he’s a bit surprised to be following Wismer again, but swears it’ll be the last time.

“Honestly, I thought I would retire from the DA’s office,” Holmes said. “I was not looking for a job. I’ve never applied but for one promotion job, and I didn’t get it. Every move I’ve made, someone sought me.”

That’s a hard lesson for young officers to learn, he said.

“Sometimes they think the grass is greener somewhere else. But your work speaks for itself. If you work hard, you don’t have to find that other job. The job will find you.”

Wismer was honored with a retirement reception last week.