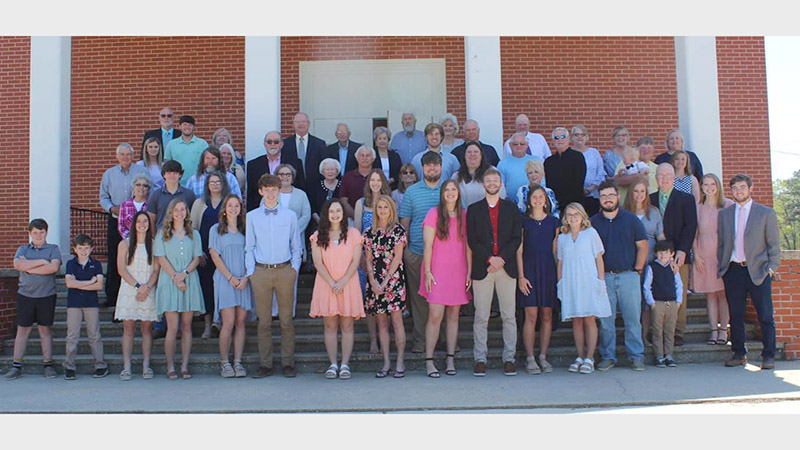 Fairmount Baptist Church in Red Level celebrates its 200th anniversary this year. There will be a homecoming celebration and service Sunday, Oct. 10 at 10:30 a.m. to recognize the church's milestone.

Founded in 1821, Fairmount Baptist Church was first made from logs cut off the land on which the church was built. The building was a place to worship and a fortress against the Indians’ attacks. It was erected on public land, and about two years later, Benjamin W. Thompson bought the land after setting up his camp near the church spring. Thompson purchased the land for 5 cents per acre and $2.00 total. He later sold it to another gentleman for 12.5 cents per acre, and that gentleman cut the timber off the land and gave the land to the church.

The second building was erected about 1867 after the Civil War during reconstruction days. It was also built from logs cut from the property.

In 1898, the church contracted G.W. Kierce to build its third building. In the early 1950s, the members of Fairmount began to deliberate regarding the building of a new church building. A committee was appointed to raise funds for a building program in 1953 before a groundbreaking ceremony was held in May 1958. Services were held in this building for more than 60 years with the last service in March 1959.

Today, the church meets in the fourth building built from timber cut off the land. Each of the four buildings has had some of the original timber passed on through its forerunners.

Fairmount has seen 42 pastors in its 200-year history. Today, the church has a Sunday morning attendance between 50 and 60 members, according to Pastor John Bell.

“We want to thank Him for giving the founding members vision for starting this church so that the community could have a place to worship and a place where members could be challenged to reach others for Christ.”

“Through this special service, we want to give praise to God for allowing Fairmount church to be in existence this long,” Bell said. “Our guest speaker, Rev. Terry Liles, is a native of Red Level, a graduate of Red Level School, and received his Ph.D. in chemistry from the University of Southern Mississippi. He was ordained into the ministry at Beaverdam Baptist Church in Commerce, Georgia this summer.”

Fairmount has a very active youth ministry, as most go to RLS. Youth Minister Steve Bailey volunteers his time helping with the high school track team. “He has developed meaningful relationships with the students so that he can be available to help with not only their athletic needs but their spiritual needs as well,” Bell said.

Each summer, the youth attend camp at The Vineyard in Coffee County. He added there have been many youths who come to Christ over the years through the church’s youth camps. They also host fifth quarter and school banquets. An active senior adult group meets at 10 a.m. Tuesdays for Bible study, and Sunday school members range from nursery age to those seniors.

Bell said, “Our members are being taught the Word of God, so they can take what they have learned and apply it day-to-day in the community. We enjoy meeting on Wednesday nights so that we can pray for the needs of the people in our community.”

Caleb Bell and Jimmy Rodgers lead the church’s choir and congregation in singing. Selections include both Southern gospel and praise and worship style music. For anyone physically unable to attend, services are live-streamed to Facebook. “We also support the Gideon ministry, which gives out Bibles all over the World. A member of our church, Larry Simms, is a Gideon.”

Fairmount Baptist Church is located at 28374 Church Street across from Red Level School. Sunday school is held at 9:30 a.m. followed by worship at 10:30 a.m. Prayer meeting and youth Bible study is on Wednesdays at 6:30 p.m.

For more information, contact Pastor John Bell at 334-764-4421. “We invite everyone to come celebrate Fairmount’s 200th birthday and will have no Sunday School on this day. We believe this Homecoming worship service will motivate us to work even harder to reach people for Christ as we reflect on the steadfastness of our ancestors,” Bell said.