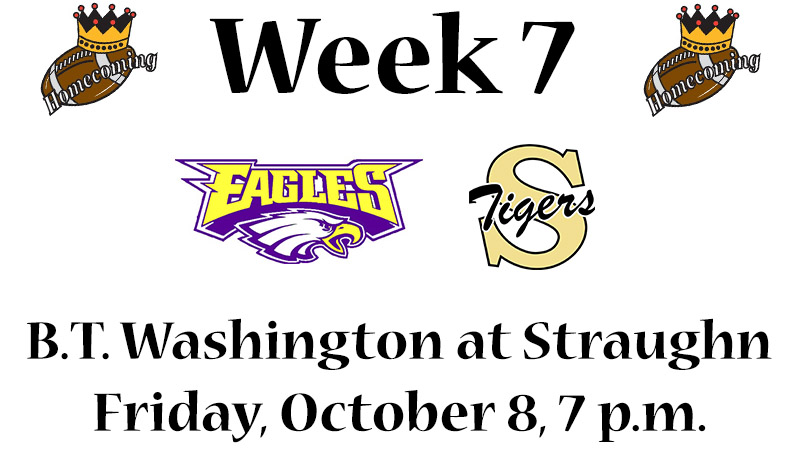 The presentation of the 2022 SHS Homecoming Queen and her court will take place prior to kickoff at 6:20 p.m.

The Tigers battled Geneva last week but came up short, 34-21. The Golden Eagles had a rough go in Montgomery and fell to St. James, 52-24.

Head Coach Ashley Kilcrease feels there are better days ahead. He said, “I thought we played really hard but had some unfortunate breaks especially in the first half that really hurt us.”

Kilcrease added his thoughts on Straughn’s progress through seven games. “Our kids have worked so hard, and we were really close last week against Geneva. I know the character of these guys, and we will continue to fight. That is all we ask of them. I am so thankful to be their coach.”

Despite all the distractions going on this week, the task at hand ultimately remains the same for the Tigers.

“Homecoming is a fun week for everyone, but we have to remember our job. We have to go out and play Friday, and that has to be our focus,” he said.

Lawrence O’Neal is in his first year as a head coach. “BTW’s new head coach is LA O’Neal, who is the son of legendary coach Jackie O’Neal who coached at Reeltown for years,” Kilcrease said. “He has done a great job so far. They are very athletic and very well-coached.”

The two teams first met in Tuskegee one year ago as the game was moved to Thursday night. Straughn opened up a 17-point lead in the first half and held on to down B.T. Washington, 31-20.