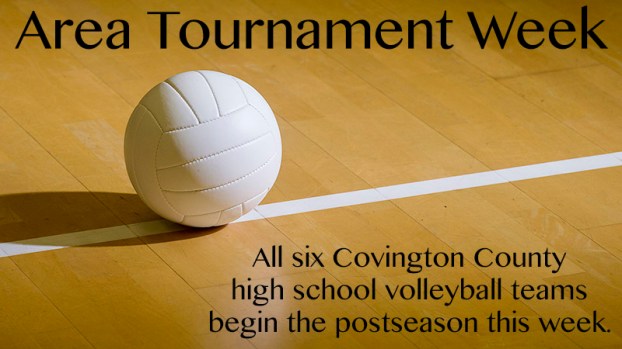 Each area will conduct an area tournament with single-elimination play using a best 3-out-of-5 sets format. The regular season area winner will host each tournament.

Live streaming of any AHSAA event outside of the regular season is prohibited and will result in a $500 fine for any school that has a game/match streamed.

The 1A Area 3 Tournament gets the week underway on Tuesday, Oct. 12. Top seed Brantley opens play at 2 p.m. against four seed Barbour County. Two seed Red Level and three seed McKenzie follow at 3:15 p.m. The championship is scheduled for 4:30 p.m.

The 4A Area 2 Tournament is set for Wednesday, Oct. 13. Top seed Straughn takes on four seed Dale County at 1 p.m. Two seed Ashford and three seed Geneva square off at 2:15 p.m. The championship is lined up for 3:45 p.m.

The 1A Area 2 Tournament is scheduled for Thursday, Oct. 14. Top seed Pleasant Home meets four seed and rival Florala at 3 p.m. Two seed Kinston and three seed Samson battle one another at 4:15 p.m. The championship is scheduled for 5:30 p.m.

The 5A Area 4 Tournament closes out the busy week Thursday. Two seed Charles Henderson and three seed Greenville commence at 4 p.m. Top seed Andalusia, who received a bye, awaits the 2/3 winner in the championship set for 5 p.m.

All area winners and runners-up will advance to the South Super Regional in Montgomery next week.

Opp 49 Wicksburg 6 Opp is one step closer to winning the 3A Region 2 title after claiming another victory... read more