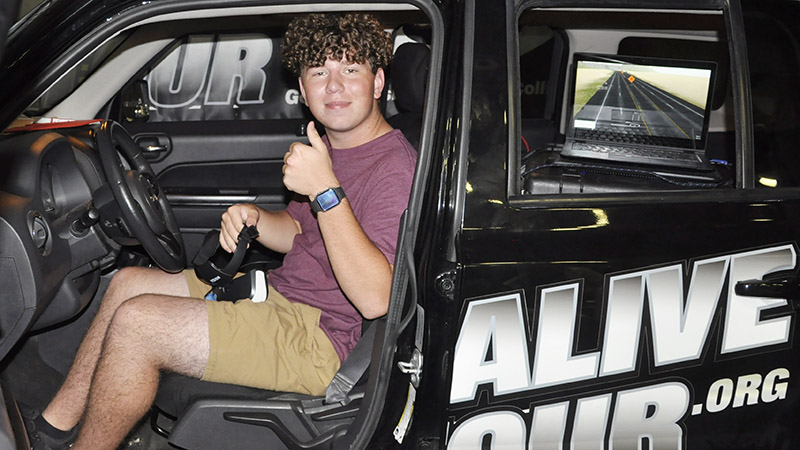 Andalusia High School's Hunter Lambert prepares to enter a drunk driving simulator that demonstrates the difficulty of driving while under the influence.

The Arrive Alive Tour is the nation’s number-one ranked drunk and distracted driving awareness event as well as the first and only marijuana driving simulator in the country. It uses a high-tech, state-of-the-art simulator that allows participants to drive while distracted, drunk, or drugged in a fully functioning vehicle without moving or being intoxicated. The simulator allows participants to experience real-life dangers without the real-life consequences.

Peer Helpers Sponsor Charlotte Spurlin said the high school has done this event for several years. “We want our student body to have an opportunity to have a good time, so we have vendors and promoters come in to help us,” she said. “This year, the National Guard came in with a gladiator pit, and we create themes such as Knock Out Distracted Driving and Don’t Toss Your Life Away with the football toss. We have fun things for them to do but also bring in things like the Arrive Alive Tour.”

Students were allowed to choose which of the three scenarios they wanted to face during the Arrive Alive Tour. “Students got to choose if they wanted to drive under the influence of alcohol, marijuana, or their cell phones. Most of them crashed and realized how bad impairment can be,” Spurlin said.

Andalusia High School sophomore Hunter Lambert chose to drive under the influence. He said, “I already suck at driving to begin with and crashed almost immediately when I was doing the drunk simulation. I never planned on driving while under the influence, but I’m especially not going to now. If it causes a crash that easily, I’m never doing anything like that.”

Lambert added he does not even have his cell phone on while driving. “The simulation was a lot harder than I imagined. It’s never a good idea to drive drunk and I don’t know how some people do it, but this showed why.”

For more information about the Arrive Alive Tour, call Nick Pitts at 888-436-3394 or visit https://arrivealivetour.com/.