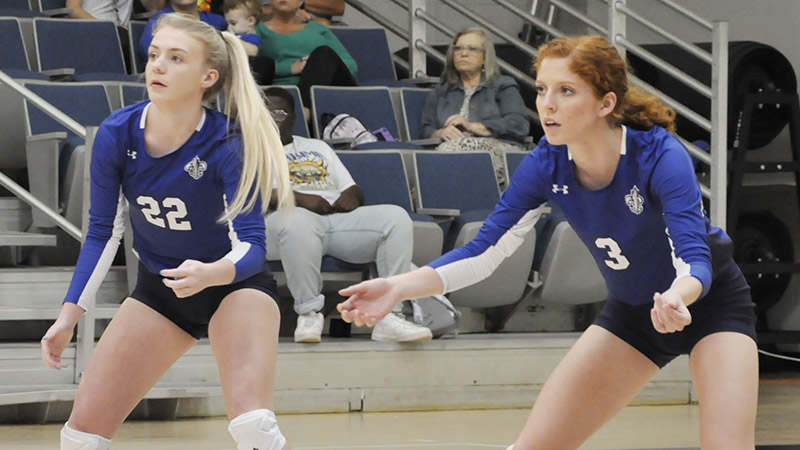 Maggie Haynes, left, and Ashton McCullar remain focused as they await a serve by Gadsden State.

“Considering the number of injuries and changes we have had to make to our roster for numerous reasons, I felt like they really gave me what they had. I don’t think there was hesitation, and they did their very best,” Head Coach Janie Wiggins said. “My parents always told me, ‘Do the best you can, and that’s all anybody can ask of you.’ I really feel like they gave it their all today, and we fell short.”

Wiggins added the Saints had opportunities to win the match. She said, “My thing to them was don’t play safe, and when we were serving, we played aggressive. I can’t fault them for that. Defensively, we had to make some changes after missing players due to injury and just being short-handed. They’re doing the best they can, and that’s all you can ask.” 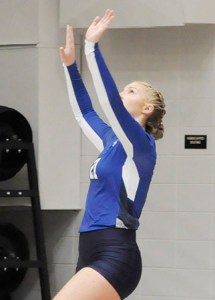 Caleigh Davis prepares to make a pass for the Saints on offense.

GSCC (9-14, 8-9 ACCC) scored the first point before Brianna Wilson tied it with a powerful kill. Alex Green swished an ace, and Callie Crider delivered a kill to help LBWCC (5-19, 4-13) build a 5-2 lead. The Cardinal responded with a 6-1 run and took an 8-6 lead. Jaden Williams pulled the Saints within one, but a 9-2 opposing run gave Gadsden State a 17-9 advantage. The host squad refused to go away quietly and gained momentum back. Kills from Crider and Williams along with an ace by Ashton McCullar closed the gap down to 20-18. Caleigh Davis had a kill to make the score 22-20, but it was not enough as the visitors took the first set, 25-20.

The Saints began the second set with a quick 2-0 lead. Moriah Seay tied the score at 2-2 with a kill. Wilson put her side back in front with a kill, and Davis used an ace to widen the lead to 6-3. The Cardinal did not back down and pulled within one when Seay had a kill to make the score 11-10. Green hit a blistering kill for a 14-12 cushion, but a 10-3 surge gave Gadsden State a 22-17 advantage. Davis executed a kill as back-to-aces by Green drew LBWCC back to a one-point game at 22-21. Williams smacked a kill to knot the score at 24-24, but GSCC held on for a 26-24 win to take a 2-0 lead.

Seay had two booming kills as Gadsden State opened the third set with a 4-1 lead. Kills by Crider and Williams allowed LBWCC to draw even at 6-6. Sidney Peterson pushed the visitors out to a 9-6 lead before the hosts tied it again. Maegan Milligan gave GSCC a 10-9 advantage, but it did not last long. Wilson knocked a thundering kill to give the Saints a 16-14 lead and force a timeout from the opposition. The Cardinal drew closer and only trailed 21-20 after Savannah Manley scored a kill. Green stretched the score to 23-20 with a kill and ace on consecutive points. The visitors finished on a 6-1 surge and capped the sweep with a second straight 26-24 win. 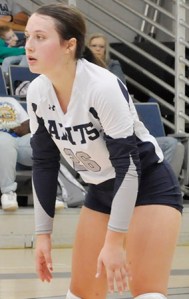 Adriane Pico keeps a close eye on a play during LBWCC’s home match against Gadsden State.

Green and Wilson paced the Saints with 7 kills each as Crider and Williams each added 6. Adriane Pico had 13 digs while Maddie Rasmussen was next with 12. Green finished with 5 aces, and Davis collected 3. Williams tallied 2 blocks, and Rasmussen garnered 31 assists.

LBWCC welcomes Lawson State Community College on Friday, Oct. 15 for its next match beginning at noon.