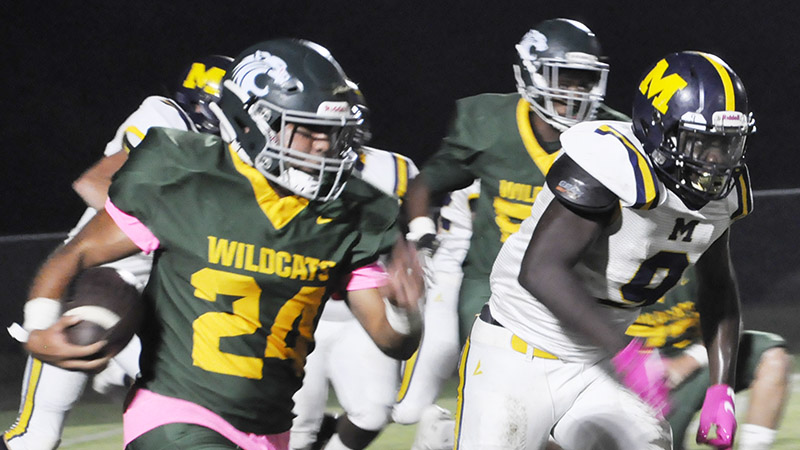 With the region’s fourth seed up for grabs, McKenzie clipped Florala, 44-35, in a high-stakes battle Thursday night.

Florala (3-5, 3-3 1A Region 1) threw a quick interception, but McKenzie (5-3, 3-3) could not capitalize and had to punt. Johan Zamora started the next drive with a 14-yard gain for a first down. Three plays later, John Howell rolled around the right side for a 59-yard touchdown. The PAT was good and gave the Wildcats an early 7-0 lead. The Tigers answered right back on just one play when Kamern Daniels scored from 68 yards out. The extra point was blocked and kept the score 7-6.

Rayshon Coleman converted a clutch fourth down with a 6-yard strike to Dalton Jackson on the next drive. The first quarter ended but not before Coleman ran 11 yards for another first down. FHS reached the opposing 12 before the drive came to a halt. MHS then took marched 88 yards downfield and took its first lead. Daniels found the end zone from 72 yards out, and the conversion made the score 14-7. Coleman threw a 76-yard touchdown pass to Austin Howell. The PAT was blocked as the score stayed 14-13 with 6:45 left in the half.

McKenzie got some breathing room on its next possession. Travarius Rudolph hit Logan Odom with a 35-yard completion. Four plays later, Rudolph extended the lead to 22-13 with a 4-yard score. Zamora used a spin move for a 12-yard gain across midfield. Coleman had a 16-yard scamper and then went to the air for a 22-yard strike to Jackson. Despite reaching the 8-yard line, time ran out, and Florala trailed 22-13 at the half.

Austin Howell began the second half with a touchdown-saving tackle off a big kickoff return from the visitors. That fired up the defense as Florala denied McKenzie on a critical fourth down stand. Zamora got the offense going with three carries for 38 yards, and Coleman connected with Colby Strickland on a 32-yard touchdown pass. The two-point conversion pulled the Wildcats within one at 22-21. The Tigers drove downfield but once again came up empty-handed.

Florala was unable to muster any offense and punted back to McKenzie to start the fourth. Zanderion Cook had a 48-yard dart and eventually crossed the goal line from 5 yards out. The try failed as the score remained 28-21. After MHS forced a three and out, Daniels extended the lead to 36-21 with a 39-yard touchdown run. Coleman earned four first downs in the air to Howell, Jackson, Weeks, and Elijah McMeans on the next series. Weeks hauled in a 3-yard touchdown reception as FHS cut the gap to 36-27 at the 3:59 mark.

The Tigers answered with a pick six by Jayden McMillian and widened the lead to 44-27. The Wildcats added the final score when Austin Howell rumbled 70 yards to pay dirt and scored the two-point conversion.

Florala travels to Brantley (7-0, 6-0) in the region finale next week.