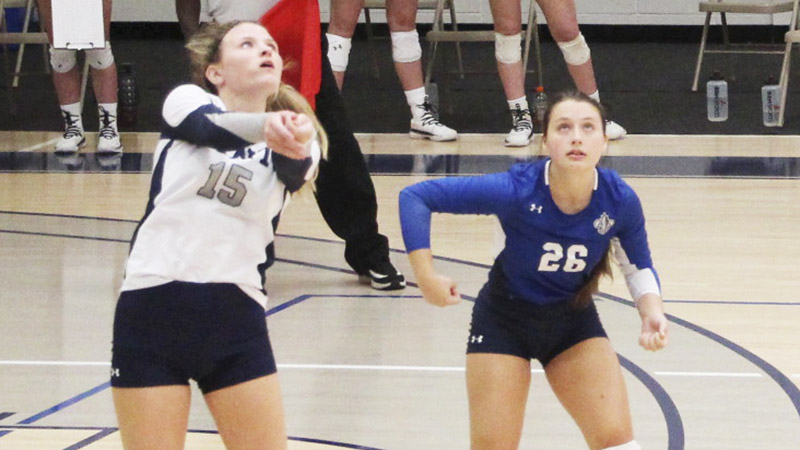 Callie Crider, left, and Adriane Pico focus on the ball during a play on offense in the Saints’ straight-set sweep over Lawson State CC Friday.

The Saints improved to 6-19 overall and 5-13 in the Alabama Community College Conference with the win. The Cougars dropped to 7-17 and 7-9 in conference play. “It was very rewarding to see the team redeem themselves against Lawson after losing to them in five sets at Lawson,” Head Coach Janie Wiggins said.

LBW won the first set 25-20, second set 25-9, and third set 25-18. “We are hoping to continue this momentum into the next two matches. Practice has gone well this week, and they continue to work hard at minimizing errors,” she said. “They saw the results of what happens when they execute.”

LBWCC welcomes Bevill State CC and Pearl River CC for a home tri-match Saturday, Oct. 16. “We are looking forward to playing Bevill again. Pearl River will be an exciting match. They have a strong team this year,” Wiggins said.

The Saints take on BSCC in a conference match at 11 a.m. and PRCC in a non-conference battle at 3 p.m. Bevill State and Pearl River play one another in the middle match at 1 p.m.