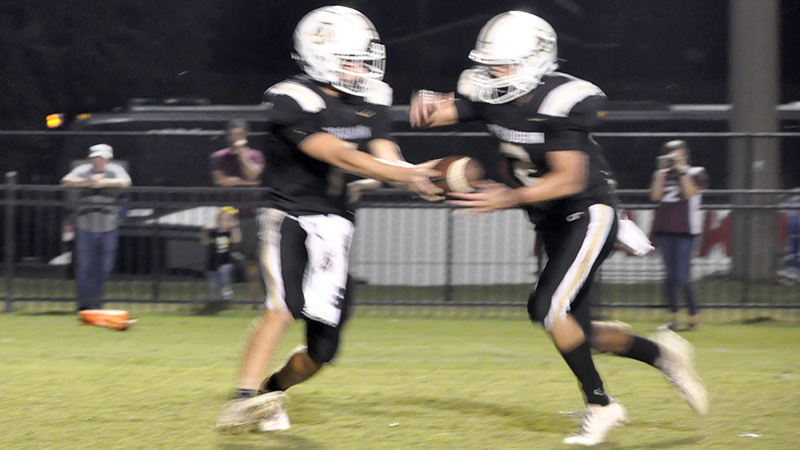 Straughn quarterback Abram Guilford hands the ball off to Aaron Olhava for the game-winning touchdown in the Tigers' huge region win over Alabama Christian.

“Our kids have grown up all year and held them 17 with as many playmakers as they have. It was an unbelievable effort, and I’m so proud of our offensive line,” Head Coach Ashley Kilcrease said. “We played great defense and ran the football. Everybody’s always saying the offensive line needs to block. Well, they did tonight.”

Aaron Olhava bolted 13 yards for a first down on the first play for the Tigers (6-3, 4-2 4A Region 2) before the defense forced a punt. Corey Landers converted on third down with a 25-yard run, and Thomas Stovall followed suit for 21 yards. The Eagles (5-3, 4-2) were held to a 23-yard field goal and led 3-0 at the end of the first quarter. The host squad took over and engineered a 9-play, 80-yard drive. Abram Guilford moved the chains twice on third down with his feet and found his brother Jaylon Guilford in stride on a 43-yard touchdown pass. Brenden Bartholomew’s PAT was good for a 7-3 lead with 10:20 left in the first half.

Hayes Hunt threw a 15-yard strike to Garrett Weathers for a first down on the next possession for ACA. SHS then forced a punt to regain control of the ball. Olhava moved the chains with a 36-yard run, but the visitors delivered their own stop. Eli Guilford denied a first down run from Hunt with a clutch sack, as the score was 7-3 at halftime.

Alabama Christian started the second half with a big return. Hunt wasted no time and threw a 28-yard touchdown pass to Avery Stuart. The PAT was no good keeping the score 9-7. Straughn only mustered one first down on its opening series. The Eagles took over and picked up two first downs. Penalties proved costly as the defense delivered a pivotal fourth down stop. One play later, Olhava found an opening and raced 66 yards to the house. The PAT failed, but the Tigers took a 13-9 lead into the fourth quarter.

ACA drove down the field and surged back in front with a 1-yard run by Landers. Following an offside penalty, Landers added the conversion for a 17-13 lead. SHS seized momentum and used a 13-play, 65-yard drive to change hands once again. Straughn faced fourth and 1 and got Alabama Christian to jump offside and keep the drive alive. Four plays later, Olhava rumbled up the middle for the game-winner from 3 yards out. The PAT hit the crossbar and was no good, but the score stood at 19-17 with 1:34 to go in the game.

The Eagles exploded with a huge kickoff return and moved the ball inside the red zone. Penalties and negative plays ultimately set up a fourth and 26 from the 40-yard line. Eli Guilford delivered the fatal blow and sacked Hunt as the final horn sounded.