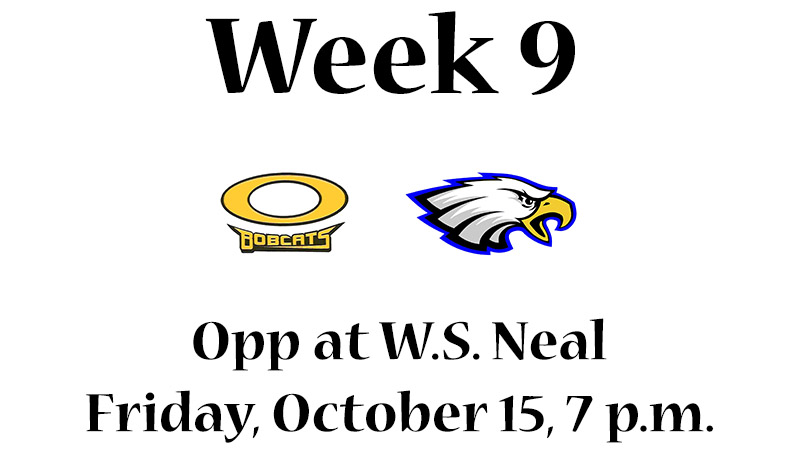 The Bobcats had a rough go at Slocomb in their final region game, 40-7. The Blue Eagles fell to Escambia County on the road, 36-24.

Opp has completed region play but can still win the region outright. The Bobcats need a Wicksburg win over Slocomb to clinch the top spot.

Head Coach Mike Dubose said last week’s game was tough. “We really played poorly, and that starts with me. I coached them poorly and did not get them prepared to play. We didn’t get over the Wicksburg game and thought we would show up and win. That’s not the way the game is played. The best team that night was Slocomb, who won the football game.”

Dubose does not want to overlook W.S. Neal this week.

“I’ve watched some film on them and know they’re batting a lot of injuries. They’re athletic, big, strong, and a classification up from us. They have a lot of talent, and it seems like they have pieces of the missing puzzle just about every week. It will be a good test for us going in,” he said.

He feels it will be a good game to prepare for the playoffs. “From that standpoint, it’s a good thing. It doesn’t have any bearing for us on the playoffs. I’m not sure how we’ll approach it,” Dubose said.

Opp edged W.S. Neal, 27-24, in the last game played on the field in 2013. The Bobcats forfeited last season’s game to the Blue Eagles due to the pandemic.