Remember When: Where is Magnolia Cemetery? 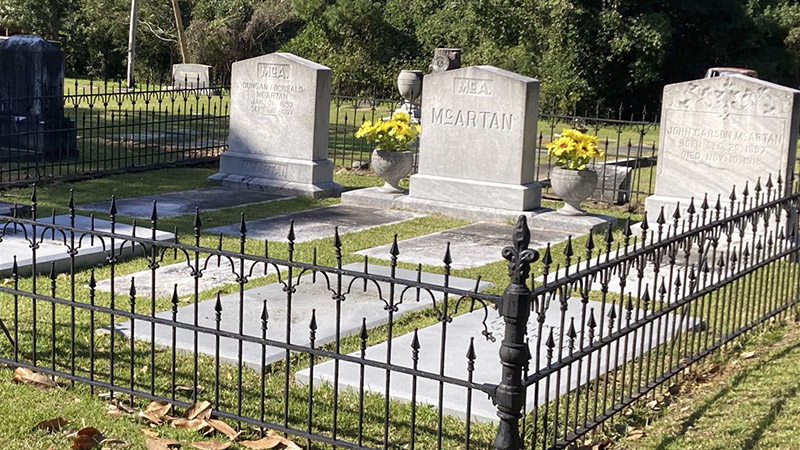 A family plot at Magnolia Cemetery

I am Magnolia Cemetery. I stand in the heart of downtown Andalusia on Opp Avenue not only with age but also with dignity. I was established in the mid 1800s shortly after the little village of Andalusia was founded when the settlers from Montezuma decided to move up the hill to higher ground. Montezuma had first been named Covington County Courthouse when the post office was established in January 1826. The name changed to Montezuma in July 1826.

The Montezuma Trading Post below the falls brought traders from up and down the river and from nearby farms and settlements. The ferry transported Montezuma residents back and forth across the river. Flooding and yellow fever epidemics were the primary reasons for pioneers deciding to relocate up the hill. Montezuma remained the county seat for 18 years.

We must surmise that the Montezuma Cemetery was left untended and at the mercy of the elements and the rising Conecuh River especially in the springtime. Some of the earliest settlers were buried there. That cemetery is lost in time since there were probably wooden markers.

Small congregations of churches were organized in the new 40-acre site of the town of Andalusia with a public square and a courthouse. The Baptist Missionary Church was one of those early houses of worship. The city cemetery was situated on the north side of that church and was named Magnolia Cemetery when it was established around 1844-1855. The oldest gravestone reads 1855. Some old timers remembered and wrote about the first person to be buried there.

The occasion was reported in The Andalusia Times, August 15, 1906 edition in an interview with Judge Andrew J. Fletcher. He remembered that the first person buried in the city cemetery was Miss Jane Russell who at the time lived in the household of a prominent attorney J. W. B. Carson. She was burned in trying to extinguish a fire in the woods in a residential portion of the town.

Judge Fletcher, 78 years of age and an honored citizen in 1906, stated, “The county seat was moved to this point from old Montezuma on the Conecuh some four miles away. There were some 30 people here back then.”

In 1906 Fletcher had served his county well holding almost every office beginning as constable, justice of the peace, deputy circuit clerk, tax assessor and collector, county superintendent of education, and the office of probate judge. Because the judge had been afflicted with asthma from his 21st year and had not since been able to be near or work with horses, hence he had been compelled to walk wherever he went and had been strengthened as a result.

According to the late Sidney Waits, “Because of two costly courthouse fires that have consumed all of the early land records in the county, there are few recorded deeds to go to and determine lot ownership of Magnolia Cemetery. A few families do have their original deeds.

Two additions were made to the old section of my grounds – one in 1926 and one in 1938. It is surprising to many who walk around the blocks or sections who find how many graves are not marked or how many parcels found in depressions in the soil indicate a burial, but no marker can be found.

I take pride in the fact that many of our founding fathers lie beneath my soil. So much of our history is now in old Magnolia – horse traders, bankers, lawyers, merchants, saloon keepers, builders, veterans of wars, and people from all walks of life. Ride through my streets and on the headstones, you will recognize many of the names of our city streets today – Prestwood, Snead, Simmons, Snowden, Robinson, Riley, McGowin, Henderson, Faulkenberry, Dunson, Baisden, Baker, Bonner, Bagley, Stewart, Albritton, Easley, Tisdale, O’neal, to name a few. 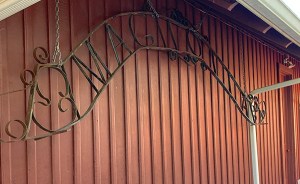 The original and historic archway that hung over the entrance to Magnolia Cemetery. It is now on display at Three Notch Museum.

Through the years, many groups and individuals have spearheaded efforts to clean my grounds, maintain the grass plots, remove dead trees, pull weeds, and to designate special work days to improve broken brick walls and paint iron fences. After all, many families have died out, the end of a line. Loved ones have relocated and are not present to tend to the graves.

Friends like Mrs. Mamie Elizabeth Burnette and Mrs. C. S. O’Neal who back in the 1917 era with the cooperation of the Civic Improvement Club labored untiringly for many years in the “city of the dead” are long gone.

The City of Andalusia workers today perform regular maintenance. The City has made significant contributions to the upkeep of Magnolia. In the past Cemetery Committees have been diligent in recruiting citizens to be on hand for necessary clean-up work. As far back as 1892, notices appeared in the newspapers to remind and encourage citizens to meet and give attention to the unsightly condition of Magnolia. “CLEAN OFF the CEMETERY” was often in the headlines.

In 1895, the mayor and council appointed a day when all citizens owning a lot in the cemetery should meet and improve the grounds on “Cemetery Day.” The Covington Cresent reported, “The cemetery is deplorably neglected and its appearance is very much out of harmony with the reputation of the town. Surely it will not be permitted to remain in its present condition much longer.”

In March 1907 The Andalusia Times reported, “Owing to the dilapidated condition of the gates and fences, stray cattle roam at will in the cemetery. The necessary repairs should be made at once.”

In August 1907, the newspaper announced that “A meeting was called at the Methodist church at which ladies representing all the churches were present. The object of the meeting was to devise plans for the improvement of the cemetery and our town in general. It is desired to have as members all ladies of Andalusia at all interested in the beautifying and care of the cemetery and town.” The Civic Improvement Club was founded at that time.

I am a quiet place in the midst of a busy, noisy, and bustling community. My grounds are speckled with lovely old Southern Magnolia, Youpon, and Cedar trees. Time has erased many of the inscriptions of the tombstones. Wooden markers have long since disappeared. Iron fences have rusted and some remain although there is evidence that a few have mysteriously disappeared. Citizens who have made outstanding contributions including several mayors rest in these hallowed grounds. These include B. H. Lewis, John F. Thomas, Edgar T. Albritton, Henry Opp, Trammell Henderson, Z. D. Studstill, J. W. Shreve, Abner R. Powell, Samuel Hitchcock Gillis, J. Morgan Prestwood, John Frank Carson, and Tracey B. Wilder.

Many visitors making genealogical searches for their ancestors show up from time to time. Whisperings can be heard if I listen carefully – “Grandfather, do you know I am here? I have looked for your final resting place for the longest and now I have found you.”

A parent visited a child’s grave and spoke gently, “Our angel, we never got to know you. You were only a baby, but I will one day meet you at the river with open arms where we will get acquainted.”

A father has often stood at attention beside a grave and voiced, “Son, we were so proud of you when you left home to serve. We will always remember you, and we will see you on the other side by and by.”

A daughter cried softly as she stooped to read the epitaph of her father, “Gone But Not Forgotten.”

Yes, I am Magnolia Cemetery. My grounds are full of the history of the people who lived and gave us memories to cherish and be treasured.

Jesus, help me to take care of all the family plots until the trumpet sounds. May I be a place of never-ending beauty and always give comfort to the ones who visit and the ones who inter their loved ones. May my monuments and their inscriptions be a part of honoring the citizens who made our town what it is today. May this place be preserved for future generations until the Lord comes.

“In a moment, in the twinkling of an eye, the trumpet will sound, and the dead will be raised imperishable, and we will be changed.” 1 Corinthians 15:52

“For the Lord himself shall descend from heaven with a shout, with the voice of the archangel, and with the trump of God, and the dead in Christ shall rise first. Then we which are alive and remain shall be caught up together with them in the clouds to meet the Lord in the air, and so shall we ever be with the Lord.” 1 Thessalonians 4:16-17